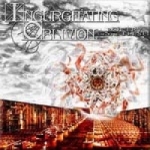 Beware for the age of Cthulhu has come again! I have sensed his thoughts, I have heard his voice and it’s calling me (calling me)! A choir of monks is singing for him and you can already hear his tentacles playing the ancient seven-stringed electric guitar. Then the other demons join the incantation with a short spell called ‘Spiralling Out Of This World’ and soon the listener is caught. And when I SAY incantation, I MEAN incantation. ‘Spiralling…’ draws you out of this world for sure while the double bass nails you to the cross! The new enchanter, voices contributor Ulrich Kreienbrink adds some more ancient feeling than his fabulous predecessor and for a moment I was looking for INGURGITATING’s seemingly lost identity (yeah, I’m fixed on singers a lot, sorry). But between those parallels to MORBID ANGEL, IMMOLATION or INCANTATION that had been there before, some demon was penetrating my mind, whispering: "Fuck you! We’re INGURGITATING OBLIVION". It has been some time since the "Cadence…" demo but considering the line-up changes that kept haunting the band, they didn’t try to write masses of songs but concentrated on quality instead, thanks for that! The second song, ‘Veil Of Perception’, culminates in an extremely evil chorus, absolutely in the old American vein – and these guys are from fucking Germany! The title track shows the skills of the newly designed rhythm section once again and those double-layered vocals drive me insane! Shall I comment on F. Cthulhu E.’s leads a little? This demon doesn’t seem to have fingers on his 8 tentacles but 8 further tentacles instead! On the other hand, he doesn’t show off all the time but supports the songs. Besides being a great tune (slow, deep and hard, hargh hargh!), the last track, ‘Deconstructed Creature’, offers some sickening lava riffs as well as furious speed and some evil "ssssss" sounds – perfect ingredients for a Death Metal meal à la carte! INGURGITATING OBLIVION 2004 is more compact and therefore easier to handle on the surface. You’ll be drawn into the depths of their spheres without noticing and trapped forever! Also, the production is more than just professional, it powerful, transparent, very natural – I love it! Labels: listen up! For the age of INGURGITATING OBLIVION has come! And as Voices readers are of the smart kind, you’ll order this CD-R right NOW! Stream to their gigs we’ll hopefully witness soon and in case you show up at the Voices fest, be there early enough for these tormentors of martyred souls. www.ingurgitating-oblivion.de