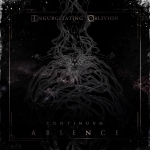 At last! Their latest effort "Voyage Towards Abhorrence" was realeased aeons ago but finally we can torment our ears and minds with more addictive Death Metal beastialities from one of my favourite German gas giants. "Continuum Of Absence" starts with ‘Eternal Quiescence’, the (in its beginning) most straight forward sickness on this album. It’s a relatively fast wall of sound with occasional slow, even doomy passages. The album increases its level of technicality and dissonance in its progress but surprisingly works as soundtrack for a road trip as well. So watch out for speed limits on the Autobahn! Even though "Continuum Of Absence" is sicker and more twisted than any of INGURGITATING OBLIVION’s previous releases, it’s easier to stay focused on its seven abominations. What really grips me are the passages I’d call psychedelic: fanatic chants on the opening track or some cleverly interwoven tribal style drums for example. Even though they sound completely different, this makes me think not only of IMMOLATION or GORGUTS, the band’s natural parallels, but also of TRYPTIKON. All these comparisons can’t deny the fact that INGURGITATING OBLIVION essentially sound like INGURGITATING OBLIVION and nobody else, though. Among other epic ululations you can find a furious version of the band’s classic ‘Descent To The Temple’ but what really destroys my mind and neck is the crescendo ‘Stupendous Featureless Still’. Uuuuaaarrrggghhh! Now excuse me for abandoning you and raising my fist to the incantations of "Continuum Of Absence". See you in asylum! www.ingurgitating-oblivion.de, www.willowtip.com