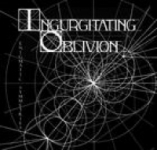 After the mighty "Voyage Towards Abhorrence" debut by these high class German Death Metallers and the great "Reincremation" split (together with IMPUREZA, ARSONIST and SUDDEN DEATH) silence followed. Finally this is broken and in a very unexpected way. "Enigmatic Symmetries" shows the band developed in a darker and more morbid way. The four tracks still sound brutal and the level is again as high as expected! With a brutal and rough production in which the drumsound is a bit strange (hollow and put in the background while cymbals and hi-hat are way up front) and musicianship again top notch, imagine late MORBID ANGEL and IMMOLATION mixed with a manic madness of PORTAL and IMPETUOUS RITUAL. Still this won’t define it as it should. The riffing is asphyxiating and rhythms pushing. The way guitars and drums seem to work separately, makes it more chaotic and frantic. What makes this different than their previous work is that vocalist Ulrich sounds manical! At the end of the opening track ‘Consecrated Ground Of Death And Ash’ he cries and screams like a possessed priest casting spells during a ritual. He gives all and personally I like this a lot. It gives an extra honest brutality because it sounds genuine and on the other hand shows the band evolved in a very personal, original and emotional way. Something I can only applaud. Perhaps in the third track ‘Antinomian Rites’ INGURGITATING OBLIVION hits more familiar ground with more coherence and this track really shreds! On the last track, the 16 minute long ‘Burden Of Recurrence’, they show a experimental side, which I only heard before from the Polish progressive Black Metal from FURIA. It takes courage, dedication and maybe vision to expand the boundaries of Death Metal in such matter. Still, this is a snapshot in time and the experiment is still going on I guess, so let’s see what INGURGITATING OBLIVION brings on their next full release which will be released by a label soon to be announced. For now, this is serious Death Metal! No doubt it will shock and not by blunt brutality. Check these masters yourself on www.myspace.com/ingurgitatingoblivion