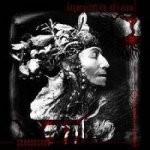 I hope I don’t have to introduce mighty INGURGITATING OBLIVION to Voices readers? Wise people have been waiting for this split CD since I wrote the studio report in 2001 (check it out!) and now it is finally being released on CD-R. It contains the material of the "Cadence And Perspective In Desolation" mini CD the band has used for label application. So for the musical part of the INGURGITATING stuff please take a look at the "Cadence…" review. Over the last year it has received nothing but rave reviews only sometimes criticizing the cheap production (hey, it’s not that bad). For example, Götz Kühnemund (Rock Hard Germany) hailed them as one of the best German underground Death Metal bands. The concept of this split CD around Joel Peter Witkin’s picture is also explained in the studio report, so what’s left to review is the part Death Doomsters SENESCENCE from Oldenburg contribute to this release. Unfortunately these 3 songs will be the last SENESCENCE tracks ever as the band disbanded some time ago. Once again they come up with strange chords and utmost madness. The first 2 tracks ‘ReHc + SeRd -> He + Am’ and ‘Harvest’ stick to more or less traditional song structures, ‘Harvest’ is just one inch away from insanity thanks to Marc Andree (OBSCENITY) and, above all, Martin Rode (HERZKRANK). Finally, ‘011029 1907 – Apan’ makes clear why SENESCENCE might have disbanded: Nyarlathotim and Co. are probably all locked away in the asylum! Only for the weirdest minds among you. This release is so full of creativity it’ll surely blow your minds, so what are you waiting for??? www.ingurgitating-oblivion.de/