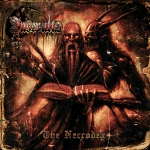 INSEPULTO is another fine horde hailing from Costa Rica’s underground, worshipping the good old days of Death Metal. This three-men horde is already active since 1993, so no newcomers at work and even though this is only their second output, you can hear from the first tunes of their current output "The Necrodex", that these guys know what they do. The eleven tracks are 90s Death Metal at its finest, pure and evil. Influences surely are all 80s / 90s bands like DEICIDE, AUTOPSY and OBITUARY, mixed with some BOLT THROWER and older DEATH, but INSEPULTO surely do not simply copy these bands! They have managed to put all their influences together and combine these with their own proper songwriting skills. All known trademarks are given, like the deeper grunts, similar to Mr. Benton’s, the groove of earlier OBITUARY releases and some Thrash Metal influences in form of early 90s SEPULTURA. Sometimes the listener even can find some Doom traces of bands like ASPHYX in their sound, when they slow down the speed and smash their guitar sound in the listeners face with their groove. So all demands for good old Death Metal are getting served. Of course they can be blamed for not being very unique or imaginative, but who cares? Their songs are really enjoyable and even after several spins they aren’t getting boring. The production is clear and powerful and the cool cover artwork completes this fine output. A recommended track is ‘Requiem Aeternae’, a Death Metal track changing into Doom Metal, with some strange caws at the end. For all old school fans surely recommended to check out. More details about the band can be found via their band page www.facebook.com/insepultocr or their current label’s page www.facebook.com/memento.mori.label