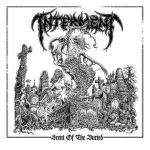 INTERMENT’s second record “Scent Of The Buried” is probably the best and most honest “worship” of pure HM-2 Death Metal you can find out there at the moment. First of all the band itself only consists of people knowing what they are doing and second they teamed up with producer legend Tomas Skogsberg at his Sunlight Studios to continue what was started in the earliest days of the 1990s by all the Anderssons, Petrovs, and Estbys, so there is actually no need to mention that this record has exactly the production it needs. Other than that it also has the songs it needs. INTERMENT really show off their skills as songwriters and deliver top notch songs which, if released about 25 years earlier, would have upheaved them into the ranks of now legendary bands. The record is an extremely diverse one covering all sorts of territories from fast and deadly “Scream Bloody Gore” type of songs to the groovier parts with some slight hints of Death‘n’Roll as in ‘Dawn Of Blasphemy’ for example. Even though there is not a lot of breaking new grounds happening on this record, I have to point out that the whole package of this record is so extremely strong that there is no denying that this record is playing in a league of its one. What I also really like to point out here is the insane lead guitar work that is heard on “Scent Of The Buried”. Holy fucking shit! But enough of my talking, now it is your turn to check out the following links to support these filthy gravediggers and enjoy the sounds of death: www.interment.se, www.facebook.com/interment, www.facebook.com/pulverisedrecords