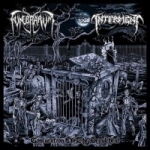 Yet another mighty old school release ready to review, I’m talking about the FUNEBRARUM (20:05min) / INTERMENT (19:36min) split CD "Conjuration Of The Sepulchral". In brackets you can see the running time of each part. Right now it is unbelievable for me to see how many great old school sounding Death Metal recordings were released the last months, I still love it and since the quality was all time far above the average I won’t complain about all this stuff to listen. So here we go, starting with mighty FUNEBRARUM from the United States offering us Death Metal in the Scandinavian way, more Finnish than Swedish sounding. Besides two own songs they offer two cover tunes (plus a short intro). First one is ‘Caught In A Vortex’ from ABHORRENCE (download the original song including all the stuff from ABHORRENCE as free download here, in case that you are interested in classic underground Death Metal from the early nineties) and ‘Into The Grave’ from, hell yes, GRAVE. The cover tunes are simply great, still I would have preferred if they had offered more own songs as their 2 songs, as they are just brilliant. Everything here fits perfect, starting from the deep vocals, the great guitar sound and the whole sound- and the song-quality in particular. Next are 4 songs (plus a longer outro), this time own songs from the old Death Metal horde INTERMENT from Sweden which are active since 1988 and released their first demo "…Where Death Will Increase" in 1991, unfortunately they never really made it which I never really understood. Right now I just hope that some label will take care of their old demos and releases them on CD in the next time as I’m looking forward to listen to them in a proper sound quality as my old tapes with these demos on it are something like third-generation copies and the sound sucks for sure. If anyone out there has their demos as mp3 files please get in touch with me! Coming back to their part of the CD. INTERMENT offer us Death Metal in the good old Swedish tradition, just like the big names from the past like UNLEASHED, ENTOMBED, DISMEMBER, CARNAGE and I have to say it like in all reviews I wrote about old school Death Metal records, you hardly find originality in here, but as soon as the songs start you get a smile on your face and have a fuckin’ great time! What’s left to say, old school Death Metal fans already have this release in their collections, others should hurry up and buy this CD immediately to become one of them soon, too! Did I say that an awesome painting from Chris Moyen decorates this amazing CD? No? Then you know it now. Check out www.conquerorofthorns.com for ordering details.