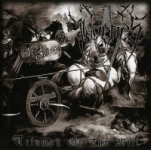 IUVENES
Triumph Of The Will
(No Colours Records)
20:21min

The sound of a Polish Pagan Metal band released by No Colours Records shouldn’t be a big surprise for people following this kind of music for some time. But Iuvenes are not a new band, they already have a bunch of releases, including a split EP with the great LEVIATHAN (US), on the same label and are well-known in the scene. In fact I had already listened to them in the past, but I was not much pleased with their music, I found it a bit too simple and typical, but I already felt a huge BATHORY influence in it. With this new mini CD they unleash four new long tracks of midpaced Pagan Black Metal with a big presence of keyboards and monotonous and repetitive riffs, which remind a lot on the fathers of Black Metal I mentioned before, as well as the classical Polish Pagan Metal scene (GRAVELAND, WOODTEMPLE…), with those harsh vocals and quite raw production, although this has gone a bit better since GRAVELAND’s beginnings. It’s clear that there’s no originality at all on this recording if this is what you’re searching for, but this time I found the songs have a lot of feeling and are quite catchy, especially on the refrains (like in ‘Cuchulain’s War Chariot’). On the lyrical side they are in the same vein as the Polish Pagan Metal scene used to have, so perhaps this won’t be a good point for some of you. All in all, I think I will take a listen to some of their last recordings before this one, as it changed my oppinion about them a bit. www.no-colours-records.de