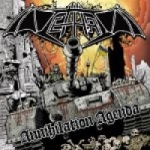 I can’t say that I like their logo, another band with the name LETHAL is active since ages and the cover as well as the lyrics are filled with clichés, nevertheless I fuckin’ like this bunch of young Swedish Thrashers. They are creating nothing new, to be honest their brand of Thrash Metal is so damned outdated and the sound of the recording is compared to the current high-tech recordings not up to date. But what you hear while listening to LETHAL’s music is that they play their brand music with a lot of passion and the 4 guys simply don’t care about the opinion of others, they just wanna rock! After their great "Deliverance" 7" EP "Annihilation Agenda" is the first full-length recording which is again released in the vinyl version through mighty Blood Harvest Records. If I’m correct the CD-version will be released through Iron Fist Records. 9 songs plus one intro are presented here on black vinyl, a feast for Thrash fans and fans of mighty KREATOR (which I think is their major influence) get a song collection presented in such a damned good way! I wonder why they haven’t used one or two of the songs from their sold out 7" EP for this long player but this just means that you get 9 new songs of thrashing madness. Each song goes direct to the point and it’s just fun to listen to this record. For Thrash Metal fans who still believe that the best records in this genre were released in the 80s "Annihilation Agenda" is simply essential! Order it from www.bloodharvest.se or www.myspace.com/bloodharvestrecords. Limited to 500 pieces.