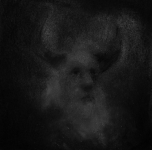 Black Metal. Nowadays, that tag encompasses hundreds of variations based on different musical, lyrical and aesthetical approaches. It has become a complex genre in itself. Ergo, finding a band that offers something different became a mission, at least for me. Add to it that I am not a huge Black Metal fan and there you go: my trips into the realm of darkness are far and few in between. Luckily, some bands, like the French outfit, MAÏEUTISTE, have found a way of mixing the concepts mentioned above with other influences. Their self-titled debut album is not a ground breaking release, since musically, they have a solid second generation Black Metal base; "De Mysteriis Dom Sathanas" era MAYHEM is a good reference point. The overall atmosphere is cold, dry and raw. But they add a twist to their music, combining slow and dense passages that evoke Doom / Death Metal trademarks, such as ASPHYX and ESOTERIC (UK). And that alone really caught my attention. There are even Goth elements present, resembling the early works of FUNERAL. Considering that these guys had only a demo tape released back in 2007 (which I haven’t heard) and this album was released this year (2015), I wonder if all this time they have been developing their style. Because what the band has accomplished only comes with a lot of work and dedication, in my humble opinion. As for their sound and production, everything checks. The eerie guitar tone with both, melodic and heavy riffing, a round pounding bass tone, great drumming with a lot of character and the vocals that have enough variation to keep up with the interesting compositions. Execution wise, these guys know what they are doing. Clocking at one hour and 15 minutes, "Maïeutiste" is not an easy listening. It will grow on you if you give it the chance. And I strongly recommend you do. Because this is one of those albums that deserves a bunch of spins to appreciate the thing as a whole. You can find all the info on the band either in their facebook page here www.facebook.com/maieutisteofficial or contacting their label here www.lesacteursdelombre.net