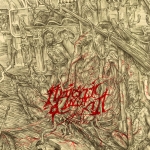 Doom / Death Metal. No-hope Metal… it’s game over man, game over… formed in 2006 this very prolific band from Mexico is presenting their sixth full length. Four songs only in over an hour of music. And let me tell you, I am very special when it comes to Doom / Death. I love the early English holy trinity before they all became more accessible. I also worship the Dutch scene with so many great bands. And I found that I enjoy those bands as even when playing in a slow or mid-tempo they had those riffs, those tempo changes and the atmosphere they create that catches your soul in perdition. But, most of the time, Death / Doom bands are not exactly my thing. Bands like WINTER or ESOTERIC or more actual like ANGUISH are really hard for me to digest. I need some violence in a faster mood like masters AUTOPSY or ASPHYX use. The other five MAJESTIC DOWNFALL albums are quite diverse between them, and have a very personal sound, yet none of them were able to really catch me up… until now. And that is strange as they are one of my fave live bands, but yes, they do play more upper tempo songs live and they sound more Death Metal, which is always good in my book. Well this new album is actually more Doom than Death Metal, but believe me when I tell you that their Doom Metal parts are not that slow and even if they play slower tempo, they have always that impending sense of darkness about to explode in any minute, and yes, some really good faster Death Metal parts, where only old school is real. Another thing is the massive and killer production and sound they achieved here, just heavy as hell. And the band is now formed by great musicians. The fact they have such very long songs in this case works in their favor, they are able to create moods within moods in their songs and if needed use a riff again eight minutes after they have used for the last time, something that few bands dare to do. I know Jacobo the bass player and mastermind in this band since his more Doom / Goth / Deathrash days in ANTIQUA and the killer old school Death Metal band ZOMBIEFICATION (their very last album is also very different from their previous efforts and has a very personal touch to it) and I am sure he is reaching his highest point as a musician. Fans of Death / Doom Metal, this is an essential release, and if you, like me, were not attracted to the band or style, this will surely change your mind. For all additional band info, check out www.facebook.com/majestic.downfall, label contact: www.personal-records.com