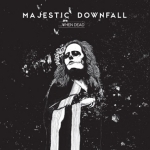 So the time has come for another masterpiece from Mexico’s forward thinking Death / Doom phenomenon MAJESTIC DOWNFALL. I have something to admit, I’m a big fan of Jacobo Córdova,. Every single band and album he is involved with has something unique and interesting to offer to the Metal community. He has been very active lately with his deadly project ZOMBIEFICATION, and while I thought MAJESTIC DOWNFALL was going to take a break and miss their almost perfect “2 years, album out” mark it didn’t happen. I’m so glad it didn’t. Back in March 2015 a big announcement was made by Pulverised Records, the highly acclaimed label signed MAJESTIC DOWNFALL and on top of that the announcement of a new album was made. It was said production wise the record was in the wrap up sessions and almost ready to hit the mix / master stage. Once I saw the news lots of questions surrounded my head “How is it going to sound like? Will it continue were “The Blood Dance” left?” In June 2015 more info was released, mentioning that on August 07, 2015 the new album “…When Dead” will be unleashed upon the masses. The cover art (one again made by the mighty Robert Høyem) looks way different compared to the band’s previous works (in a good way) with a mystic and refined touch. The hopes were set high, and now the time has come for the final verdict. Let me start this review by saying: “…When Dead” is the most mature effort MAJESTIC DOWNFALL has done in a 9 year career. This time the band opens the album with a haunting instrumental track that sets the mood for what will come for the next 51 minutes (total playing time is 53:24min). I don’t know exactly how to explain this but I’ll do my best. As soon as the second track kicks in you know this album was written with a different approach to the classic Death / Doom formula, adding lots of fresh ingredients to the plate, so the album can appeal to Metal freaks in general. However, fear not…, the core of the record is still heavy and pounding Death / Doom but with a twist. The melodies are still there, the heavy low tuned guitars are still intact and the heavy hand drums are playing a bigger role this time. First thing I noticed was the big wall of sound, the (post) production makes it sound heavy but very articulated, the work of Tore Stjerna (Necromorbus Studio) suits great and helps to shape and tie up this sonically immense (mammoth proportions) album. The second thing to highlight here is the ambient set through the entire record; it takes you on a one way ride, like a whole picture set to be revealed in its full form once your record player stops, unveiling the path you have walked. The tracks flow seamless and the effects make the songs unique on their own. And last but not least, the vocals here are top notch, great performance in a variety of tones but maintaining the same style through the whole album. I wouldn’t compare “…When Dead” with other records of the genre because it’s different in its own nature yet recognizable and if you are a fan of the genre will make you feel like home. I think “…When Dead” will be marked as a milestone in MAJESTIC DOWNFALL’s career and the band’s next works will be measured from here. I can easily see this album making it into hundreds of end of the year lists for 2015. Listen and buy “…When Dead” here: www.facebook.com/majestic.downfall, www.pulverised.net