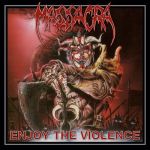 Aaaaah… how sweet memories for a release so violent! This was the second Metal album I ever bought (in the recordstore of a small Christian town) and KREATOR’s "Pleasure To Kill” was pushed away from the throne of brutality. With sometimes double the speed, shredding riffs and top intensity it was a new found glory. Now, almost a quarter of a century later, the question is whether this album has stood the test of time or not… Prior to this record the band had released three demos and one album. "Final Holocaust” from 1990 was a fine debut with riffs that are sometimes rougher than on this one. In terms of songwriting there was a significant step forward and especially the production turned out better and more balanced. The first part of the album is nice and speedy with the titletrack and ‘Ultimate Antichrist’ after which the speed drops to underline the quality of the guitar playing. When the fire seems to fade towards extinguishing there’s fortunately a track like ‘Sublime Extermination’ to lit things up again. Further explanation is of course superfluous since everybody owns or has heard this album already! Meanwhile there have been popping up different versions. In 2005 there was a re-release with 5 nameless bonustracks and two live tracks. This same version was re-released two years ago on the Polish Hellshop.eu with altered cover art and last year a vinyl version (without bonus) got available through Argentinian Disembodied Records. What this version on Centry Media distinguishes are again five rehearsaltracks from 1991, namely ‘Researchers Of Tortures’, ‘Beyond The Prophecy’, ‘Final Holocaust’, ‘Cyclone’ and ‘Trained To Kill’. The soundquality (I haven’t heard the tracks of 2005 so I can’t compare them) is of course not superb but decent enough and supporting the rawness of Death / Thrash. In case you already possess "Enjoy The Violence”, this version doesn’t make a purchase mandatory, but as always listen and judge yourself, because they’re shredding enough! For a ‘subgenre’, this style has produced some excellent albums like the (debut) albums from INCUBUS, MERCILESS, MESSIAH, RIPPING CORPSE, SCHIZO etc. and MASSACRA belongs here as well even though the level of excellence from "Enjoy The Violence” was never reached in following records. The previous question can therefore easily be answered with a big YES! For further information, check www.facebook.com/massacrafrfanpage, www.centurymedia.com 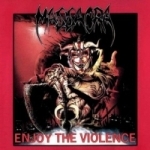 French MASSACRA released another classic after the hellish good debut namely “Enjoy The Violence”, their most brutal effort. Also the band’s following releases had their unique qualities (especially “Signs Of The Decline” was a cool piece of Death Metal) yet MASSACRA left the paths of Death Metal on “Sick” and “Humanize Human”, the latter being their swansong. On “Enjoy The Violence” (recorded in January 1991) the band was as its musical peak during its Death Metal times. Predominately fast, always aggressive, still heavily Thrash – influenced Death Metal with excellent coarse vocals, murderous riffs and ripping solos, more inventive breaks than on the debut and a production that still kicks ass nowadays! Nobody into classic Death Metal can continue breathing without this album, it’s a must-have… The bonus material on “Enjoy The Violence” consists of seven additional, never before released tracks, five being quite ok sounding rehearsal recordings done in 1991 and two live tracks showing MASSACRA’s “different” side in 1995, way more modern and slower yet an interesting contrast to “Enjoy The Violence”. Total MASSACRA – addicts won’t get around buying this one, since these are true rarities, people who like to check out a fantastic, intense Death Metal classic may not miss this as well. My personal favourite of this band! Any additional info here: www.sharkrecords.de/rustydiamond