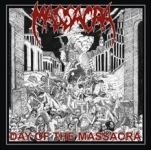 First of all: does MASSACRA need an introduction? If you are a die hard underground Death Metal freak, then their first three albums probably have a special place in your collection (and if you have them on vinyl then you are one lucky bastard). If you are a younger Metal disciple, and you never heard about them, then it’s time to do your homework: in some circles these guys have such cult status as POSSESSED, or early PESTILENCE, GORGUTS, NECROPHAGIA or SEPULTURA albums. Allright, they did two albums in 1994 and 1995 most of us would prefer to forget, but their early stuff is absolutely terrific. So what is the "Day Of The Massacra"? No, sadly it’s not their glorious return to Death Metal. But it looks like it will bring even more happiness to the dark hearts of die hard fans of this cult act than the new album, as it’s a compilation featuring three complete demos: "Legion Of Death" (1987), "Final Holocaust" (1988) and "Nearer From Death" (1989), so from the ancient times, before monuments such as "Enjoy The Violence", "Signs Of The Decline" and "Final Holocaust" were forged! Forget the boring albums MASSACRA did in the middle of the ’90s: this is pure old school thrashing Death Metal: dirty, violent, evil and furious. Far from all those modern productions with edited clicking drums, and guitars tuned down to Z, but with balls and with fists in the air! It’s also worth mentioning that someone really did a great job with the remastering, so if you remember these demos from your tape trading days, you will be surprised how great these songs actually sound. Kudos! The album will be available as CD (with big fat booklet), digital download (seriously, anyone wants to have cult stuff like that on mp3…?) or LP. The vinyl version of this release will be available from cmdistro.com only: 180g black vinyl with booklet and with MASSACRA logo patch, or transparent 180g red vinyl with booklet and patch (better hurry if you are thinking about this one, as it will be limited to 100 copies only). Label: www.centurymedia.com, fan page: www.facebook.com/massacrafrfanpage