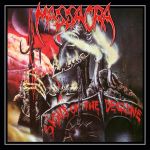 Once upon a time we had a great French band named MASSACRA, they released two legendary albums in 1990 and 1991, entitled "Final Holocaust" and "Enjoy The Violence" and then their third album in 1992 "Signs Of The Decline", the album that was my first enocunter with the band, so it has a special place in my heart, even though it is getting slammed hard pretty much all over, which I still can’t fully understand. Of course it’s not as standard thrashy and straight ahead as the two first offerings, though somewhat darker and more oriented towards groovy Thrash and slowpaced Death Metal, with some fast parts in the mix as well. It starts out fast and fierce, shredding riffing, pounding and punishing drumming and an agonized mix of a scream and growl. The pace is shifting quite a lot during the 10 tracks on this release, from heavy and groovy thrashing to aggressive Death Metal attacks all spiced up with some great ambience, fierce guitarleads and pure intensity. We have the all dark and atmospheric track in ‘Mortify Their Flesh’ which drags us down in its all-swallowing vortex, followed by the midpaced thrasher ‘Traumatic Paralyzed Minds’ with its atmospheric guitar parts towards the end, MASSACRA is playing a bit with us on this release and shows us their full potential, a quite large potential. MASSACRA is in a transition from the all in straight ahead Thrash / Death Metal attack that painted the beginning, into a more groove and atmosphere based entity, and I guess that is what threw many off, back in the days, though listening to this album today, it is hard to deny the strength of it. It is strong and does have some really interesting and intense moments, and so much energy and aggression, not to mention the great and frantic musicianship and songwriting efforts. No matter what I’ve written in this review, and no matter how many times you listen to the album and praise it to the skies, as I know you will like it a hell of a lot as well, it will never reach the same acknowledgment as the two first offerings from the Frenchmen, which is a damn shame, as the three albums should share the top of the pedestal, as they all kick so much ass in each their own manner. These three albums are a history lesson with icing on the top, of how thrashing Death Metal should sound and feel (and develop). The two live tracks thrown in as a bonus on this release are quite superfluous, not that they aren’t nice to hear, though two tracks, why not a bit more so it doesn’t seem like a cheap filler. Enter the day of the massacra: www.facebook.com/massacrafrfanpage, www.centurymedia.com 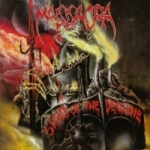 Many may agree with me that MASSACRA can be considered as one of the best Thrash / Death Metal bands of the early nineties together with fellows AGGRESSOR or Swedish MERCILESS. When the old gods started to lose the grip and started humilliating themselves releasing worthless crap, MASSACRA entered the picture and gave us a new hope. Sadly enough the guys eventually suffered from the same illness that bands like KREATOR, DESTRUCTION and many others were victims of. “Signs Of The Decline” stands as part of that legacy we may stare back at with pride just by the fact the this is their most complete, technical and defying Thrash / Death album ever released. They took the improvement shown in “Enjoy The Violence” (their second album) to unexpected levels of perfection. Such material couldn’t have been better complemented with no other like Colin Richardson behind the mixing desk and a decent multinational contract. Two years after this phenomenal slab they released “Sick”, of which this re-release contains six tracks as bonus. Honestly, I personally would have preferred any other bonus stuff than these songs. Why? Well, just to put it simple this is not MASSACRA anymore! Just check songs like ‘Madness Remains’ or ‘Closed Minded’ which are really “annoying” to say the least and not using more realistic terms. Now I realize the reason why the word “decline” was used before “Sick” was released. It was a prediction of what were coming next. This is a worth the money purchase just because the ten tracks that makes the “Signs Of The Decline” album, the rest are just fillers of what seems to be a shadow of their formerselves. If you wanna get a copy contact the label at: www.sharkrecords.de.