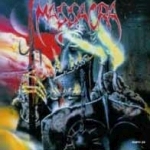 Remember Earthshaker Records, Bonebreaker Records, a-b-s Records, Cream Records or Shark Records? Well, it’s all basically the same company, founded by Crazy Life Music owner Axel Thubeauville throughout the years. It seems that Axel really likes to give birth to new labels (probably for business reasons beyond my knowledge) and just recently – again – returned to the scene with two more of them: Nu Metal Recordz and Rusty Diamond Records. While the first one is obviously dedicated to the most annoying form of "Metal" ever created, Rusty Diamond Records is meant for re-issues of classic material. The first four releases so far have been Germany’s ATLAIN, America’s HOLY MOTHER, the lengendary X-MAS PROJECT and French MASSACRA. The basic concept behind this series is definitely very cool, especially if the originals are already kinda hard to find items nowadays. The MASSACRA records for instance have been out of print for quite a while now and therefore I appreciated their return very much. But my enthusiasm was completely killed when I received "Apocalyptic Warriors, Pt.1". Instead of doing the quality of those records justice by coming up with bonus tracks, liner notes, an impressive booklet or any other form of extras, the result just turned out completely cheap and poor looking. The new cover art (of all Rusty Diamond releases) features "erotic artwork" (which looks rather stupid and has nothing to do with how all the band’s used to present themselves when they were still around), while an original cover was used on the booklet backside, in a ridiculously bad quality though (kinda like a poor color-xerox). But that’s not even all when it comes to the negative aspects here. The included MASSACRA info sheet describes this as a compilation of fifteen tracks from the first three albums "Final Holocaust", "Enjoy The Violence" and "Signs Of The Decline". Well, this information is far away from the truth! "Apocalyptic Warriors Pt.1" is nothing but the whole "Signs Of The Decline" album (tracks 1 – 10), with the first five tunes of "Enjoy The Violence" added at the end of it. So, instead of doing these kinda superfluous releases, "real" re-issues of all the three MASSACRA albums (on Shark Records) would have made a lot more sense. Especially considering the musical quality of these guys which is still kinda impressing ten years after the original release. Aggressive, old school Death / Thrash in the vein of SEPULTURA ("Beneath The Remains" period), just with a more brutal vocal approach. So, definitely cool stuff here, but my advice is to continue on with the search for the original versions and to avoid this (said to be "remastered") shit! At least they are being sold at a very low price and aren’t necessarily meant for die hard collectors like myself. Further info: www.clm.de