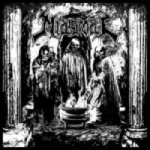 Gothenburg-dwellers MIASMAL have defecated a chunky slab of staunchly traditional low-tuned Swedish Death Metal with a charge of Käng on release number two. Coming after a four-song demo tape, this vinyl offers two new tracks and nothing new under the Sunlight sound. Yet it’s nearly perfect at what it aims to achieve, which is a heavy, groovy, pummeling for the aficionados and anyone else who can’t resist boogieing down to that roaring Death Rock madness. Right off, I’m hearing DISMEMBER, or was that ENTOMBED? No matter, think of a platter of carnal leftovers minus the blasts. I smell only a faint whiff of AUTOPSY (twice-removed on their mother’s side). The brutal DISCHARGE beats and careful attention to the rock in the classic Death & Roll formula lends this a snarling, up-tempo feel throughout. Guitar leads and solos are competent and well-placed. The vocalist’s delivery is more angry than putrid, which distinguishes them from other, more ghastly contenders. Overall, das ist gut scheiss. Visit www.myspace.com/miasmalband, www.detestrecords.com or www.mesacounojo.com 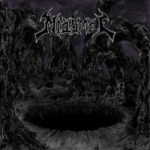 The Swedish Death Metallers MIASMAL have roamed the underground for a few years, and have 2 praised selftitled releases under their belt, which makes this album the third selftitled release from them. The two first releases, a demo and a 7" EP are both included on this debut full length CD, quite a gesture for us maniacal headbangers. What fan of a band doesn’t want the band’s whole discography at hand at all times? I know I do! Swedish Death Metal, say the words and taste them, and you’ll know it’s good! I’ve been a fan of Swedish Death Metal for way too many years to still be sane, and people who know me, know about my fetish for ‘the new wave of Swedish Death Metal’. The grim return to the roots of grinding and distorted guitars, a rumbling and organic, yet ominous and eerie sound, close the one made infamous in the Sunlight Studios back in the late eighties and start nineties and more or less defined Swedish Death Metal back then (and well for quite a big horde of Metal heads, still do). MIASMAL takes on the task by setting up an immense and crushing dark atmosphere that sucks you into a void of grim yet catching guitar riffs and cataclysmic rhythm patterns, the doomy touch that more or less always lurks just behind the initial structure is a touch of genius. The growl is raw and quite intense, and the small melodic guitar parts that jumps into the picture here and there are well made and placed, together with the sweeping melodic leads. The band knows how to craft a tune and deliver it with energy and sincerity. The synth used on the last album track ‘Chronicles’ just before the music goes from doomy into a blast beat frenzy does work out great, and is something that might could work in other tunes as well, a well made touch. The eight tunes that makes the album, is a journey through the darkest parts of the mind, and if you not already have lost your sanity and heart to Swedish Death Metal, this album might do the trick. The music together with the dark, grim and raw, quite lo-fi production makes a whole experience, that makes it mark on the listener. That sounds very intellectual and like you have to be initiated into the cult, before this album can be taken on, though that’s not the case. "Miasmal" is quite straight on and can (will) be enjoyed by a fan of Death Metal. Though countless listens to the album won’t make the experience less exciting and profound! On top of the selftitled album, we also get the selftitled demo from 2008 and the selftitled 7" EP from 2010 (how many times do one get the chance to write selftitled, as many times, as in this review?) both splendid releases that shows the band in a bit more raw version than on the album, though still the same hard hitting and gripping atmospheric dark Death Metal, quite a bonus that more than makes the release worth its price! MIASMAL was with their demo a band of the future, with the 7" very close to hitting it off and with this album they have hit the nail on the head, and is one of the bands that we have to count in as a torchbearer of Death Metal anno 2011, and hopefully in many years to come. I was first hooked when listening to the demo when it was released, and after listening to this album there is no way back for me, or my gospel of MIASMAL, this is one of the albums that has to be owned, if you only could purchase one album this year, this should be the one and if you can’t afford it, steal it! www.myspace.com/miasmalband, www.darkdescent.net