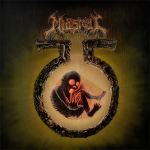 Second album of this Swedish band, that upon their appearance in the Death Metal scene caused a good reaction with their demo, 7” EP and further debut album. Their style has not changed that much in the sense that they still sound something like ENTOMBED with a subtle Hardcore / Punk sound. And that is also noticeable here. For some reason, this second work reminds me of “Clandestine” in its overall aura, rather than the complex composition. After a few listenings, this album sounds a bit darker than their debut, and showcases a more imaginative composition as well as a very good performance, and at the same time I do sense it to be more controlled and a tad bit slower, well, not that they played very fast to start with. There is a creepy sense of melody floating around, as it can be heard on the closing track ‘2013’. The cover art is a bit weird and has a cartoony feel, although it expresses a bit what the band lyrically wants to say which deals with death and misery. At first the album seemed to be not as good as their debut, but then again, later listenings will reveal slowly but deadly, that they have reached another step in their evolution, while maintaining loyal to their roots. This is one that grows with every listen. www.miasmal.net, www.facebook.com/miasmal, www.centurymedia.com