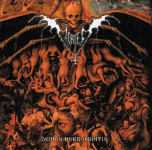 MORTEM released a new record. MORTEM do not need any introduction because MORTEM are evil, cryptic, deadly, demonic, satanic and bewitching. MORTEM are Death Metal. MORTEM rule! And so does "Deinós Nekrómantis". The fifth full length release of these legends delivers from front to back as one already might have expected. Starting the record off with classic guitar squeals and backwards messages it is 36min of pure Death Metal from the crypt that awaits you. And I really mean from the crypt because trust me, I’ve been down there and know what’s going on between decaying bodies, skulls and bones. It’s so satisfying to listen to a record that is released in 2016 and totally delivers THAT feeling of POSSESSED, DEATH, MORBID ANGEL, SLAYER, SADISTIC INTENT and everything else that came crawling out of a grave that according to some never should have been opened. If you look at the cover, read the title and tracklist one simply can’t deny that it feels right and like comming home. MORTEM deliver great atmopsheres as in the opening track, outstanding Hanneman / King lead guitar raping (‘Horror Of The Unliving’), REAL evil Thrash riffs (‘The Pain Of Being Dead’), top notch intros an middle parts (‘Liquified Blood Of The Saints’), hellhammering drumfills and patterns (‘Within The Woods’), riffs that immediatly conjur Captain Howdy and will turn you into a slime vomiting and fluently latin speaking christian nightmare (‘Possessor Of Lost Souls’), a VENOM cover (‘Satanachist’) and a closing track that combines all the above to leave you ripped and torn. "Deinós Nekrómantis" is horror set to music and probably my favorite Death Metal record of the year, and yours too. Convince yourself over at www.facebook.com/pages/the-true-mortem-perú/151727424891464 and www.iron-pegasus.com.