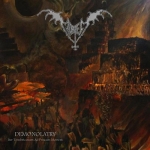 One of the best known bands in South American extreme Metal are MORTEM, The True MORTEM from Peru of course, not the ones from Argentina or Colombia. The status of the band in the circles of those who know can only be called “legendary”, due to their demo recordings and especially the four albums MORTEM released between 1995 and 2005. After “De Natura Daemonum", the last of these four albums, the band was not that release happy as before, asides from the EP "Devoted To Evil" in 2006, a live album and a split 7” with PENTACLE. This recently released double CD is by no means a new album either, but a compilation of old recordings. But a compilation of the most interesting kind, not only in a historical meaning, since “Demonolatry – Iter Tenebricosum Ad Priscam Mortem” features all of the four demos MORTEM released from 1989 to 1993 in the best enjoyable quality, taken from the original audio. In other words: these two discs, accompanied by a 32 page booklet with old pictures and lyrics portray the evolution of MORTEM from the cellars to their first album “Demon Tales”. The first CD starts off with the 1989 demo tape "Evil Dead". This tape showed a young and hungry, yet not too skilled band that made their first steps into a studio. Contrary to their later stuff, this early incarnation of MORTEM reminded of early SEPULTURA with the spirit of old POSSESSED recordings. Since nearly all the songs made their way on to the first two albums, it is very interesting to hear the early versions of classics like ‘Satan II’ or ‘Mutilation Rites’, that are rawer (naturally) and thrashier than the better known album versions. The other demo recordings "Superstition" (1991), "Vomit Of The Earth" (1992) and "Unearth the Buried Evil" (1993) presented MORTEM as they are known: a raw, sometimes a little chaotic and always true Death Metal band that takes no prisoners. As I already said, nearly all of the songs can be found on the four albums of the band, except for ‘Evil Dead’, the title track of the first demo, ‘Zombie’ from the “Superstition” tape and ‘Evocation Of The Devil’, that was only the intro of the last demo anyway. But the unpolished and very primordial sound of the demo recordings make “Demonolatry – Iter Tenebricosum Ad Priscam Mortem” a listening pleasure for all those who love original and not too complicated Death Metal. In addition to the 21 demo songs, we find four of the six songs from the “Devoted To Evil" EP, that was never released on CD before. It’s beyond my knowledge why ‘Dead Forms (Of Evil)’ and ‘One Of The Dead’ were left off the CD, maybe it is because they were part of the “De Natura Daemonum" album. Anyway, this nearly complete anthology of all MORTEM recordings that weren’t available on CD yet wets the appetite for new songs from the Peruvian masters of Death Metal. Check them out at www.facebook.com/pages/the-true-mortem-perú/151727424891464 or visit the label responsible: http://veinsprods.bandcamp.com