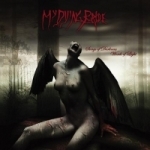 After the UK doomsters reanimated the Death Metal elements of their glorious early days on the last two, really excellent studio albums “The Light At The End Of The World” (1999) and “The Dreadful Hours” (2001) their 2004 effort “Songs Of Darkness, Words Of Light” marks the return of the melodic, more Gothic-compatible sounds one witnessed on “The Angel And The Dark River” (1995) and “Like Gods Of The Sun” (1996). Aaron Stainthorpe’s vocals have obviously improved a lot on the last two MDB records and although the clean vocal parts dominate the new CD they do not bore at all, but intensively exploit the depths of sadness, dark emotions and forlorn melancholy. Fortunately the Death Metal parts were not completely abandoned, but appear less often and when they appear they are not faster but heavier than ever! Sometimes Stainthorpe’s tormented growls and screams even reach Black Metal-like spheres and thus add at least a little innovation to MDB’s elaborated and proven successful concept of Doom Metal. Beautiful, haunting melodies in ‘The Scarlet Garden’, pure drama and tension in ‘Catherine Blake’, sinister, creeping gloom torn up by the most fragile clean vocals Stainthorpe ever delivered in ‘The Prize Of Beauty’ are good examples for the great amount of variation, songwriting and arrangement skill MY DYING BRIDE represent today. The deadly and softer elements in their music have melted into one mysterious and intriguing soundscape any MDB-fan should really enjoy and although I am partial to the harsher elements in their sound, I think on this album both styles fit together better than before and when I feel the need for quieter sounds I’ll pick this… Follow this link peaceville.co.uk/press/ to some way too short sound clips, a couple of great new photos and see the new cover. The band’s own website can be found at www.mydyingbride.org.