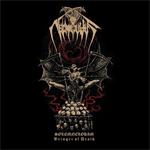 Long time Death Metal mongers NECROCCULTUS return again after a few years since their debut album. Originally intended to be 2 separate 7” EP recordings that for one reason or another ended up cancelled in the original format, they are now presented here as one very good 12” MLP released by the mighty Blood Harvest Records. If you have never meet thy doom with this Mexican Death cult, I must warn you that in their veins lies the black blood that bands like ASPHYX, NECROPHOBIC, CONVULSE, IMMOLATION and DEMIGOD just to name some references, permeates the souls of these purveyors of darkness. Their occult Death Metal is mostly done in a mid-paced aura, although some faster parts are added to keep the intensity awake. The production values are also of a very high quality, and it must be added that due to line-up changes since their debut album, that is also noticeable on the music and performance that in these rotten ears, they have developed more and more towards a sound of their own, and shows a more mature band. The lyrical aspect has maintained the same influence since the demo days, that of death, doom and damnation in an occult, wicked essence of a burning corpse. This, as a teaser of things to come, is a mandatory acquisition for old skull death meal maniacs. Although this vinyl release was limited to 300 copies, the compact disc version is imminent to be released in the next months (and for what I am aware it will contain an extra song) so there will be no excuse not to add this to anyone with a worthy collection of skulls and the essence of darkness. By the way, killer cover artwork by Daniel Desecrator. www.facebook.com/pages/necroccultus/116080975129390, www.bloodharvest.se