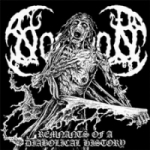 Announced by the band as “the ultimate cavalcade of Death Metal hits from beyond”, this mixed bag of rare, previously only on vinyl available tracks by this long-standing underground heroes took some time to see the dark of night. After some trouble with incompetent labels, which these guys probably had more than enough of during their 13 years in existence, Pulverised finally unleashed this collection of re-recorded, unreleased or hard to find tunes by one of Sweden’s best kept secrets in terms of old school Death Metal. It contains mostly material from their promo CD back from 1997 and the “Blaspheming The Dead” EP, covers by acts such as REPULSION, VOIVOD or WHIPLASH (vinyl-bonus from their last full-length) and then some. The sound-quality varies but their sinister approach to the death-cult, somewhere between KAAMOS and SADISTIC INTENT, combined with a huge slab of Thrash (‘Sodom’s Fall’!!) never fails to convince. Personal highlights: the new versions of ‘Blaspheming The Dead’ and ‘Servants Of The Moonlight’. In conclusion this collection serves as a nice little gem for the die-hards as well as a cool introduction to the work of a truly dedicated horde, which deserves your support far more than overrated retro-acts such as BLOODBATH or DEATH BREATH (when it comes to the latter, luckily tastes are different… – Frank). www.pulverised.net