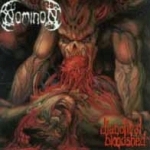 Death Metal… Swedish Death Metal. If by today you have not heard about this great band NOMINON, or you have just passed them by, you are in a big mistake. Then again, if you already know them for their later albums, this is an excellent time to rediscover their debut album, which was released back in 1999, and thanks to Deathgasm, this has been unburied… again! NOMINON on their debut album is a bit different from their later releases. Whereas in their great albums like the latest “Terra Necrosis” they are a deep Death Metal band in the early Swedish low-tuned tradition, in their debut album they do have more of a Deathrash approach. Their guitar sound comes from the school of ENTOMBED, while some riffs are also to be found reminiscent of early MORBID ANGEL spiced with SLAYER touches. Some songs like the killer ‘Sodom’s Fall’ has a sound that also reminds me to some American Deathrash Metal, like MALEVOLENT CREATION although with that distinct Swedish guitar tone. Yes, they are a bit more melodic here, a bit less brutal, so maybe that is what I find so charming of this band, that every new release they have been slowly (d)evolving into a more macabre and dark musical unit, whereas many times it is all the other way. Back in 1999 NOMINON compromised of members that later went on to bands as diverse as BULLET, THY PRIMORDIAL, PAGAN RITES or MARDUK just to name a few. I suppose that this vast arrangement of musical preferences of the members is what makes this one such a strong release, as although defined as a Death Metal band with many Thrash influences, some slight Heavy and melodic Black Metal subtle sounds are melted. The production is very good; it sometimes gives to me a certain demo sound, but in the positive sense. Comparing the lower guitar tone of their later releases, more than one would get the idea that this was a different band. Yet, as told before, the essence is here and has been there all the time. For a recording that is almost 10 years old, this deserves to be enjoyed again. I just cannot stop banging my head to such heavy thrashers like ‘Servants Of Moonlight’. And, call me insane, but I do hear some riffs that have a lot in common in some way THE CHASM composes. My only probably complain is that the guitar sound could be louder (or just maybe I am infected by the bigger guitar sound / tone on former albums) and that some tempo sounds bit similar from song to song. In the song ‘No Holy Ghost Shall Rise’ (killer title by the way!) I can also hear some very early DARK TRANQUILLTY sound. But fear not, this was just the beginning, the band proved to be a real armageddon turned into music, as subsequent albums are heavier, deadlier and with a lot more personality. Still, this release swipes the floor with most of today’s new albums, so if this is not in your collection now, it is time to fix that. And if you have not been familiar with the band, it is your Heavy Metal of Death duty to check them NOW! And buy ALL their stuff. NOMINON means a seal of darkness and quality Svensk Döds Metal! www.nominon.com, www.deathgasm.com