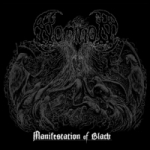 Having existed since 1993, NOMINON don’t belong to the current generation of Swedish Death Metal. I would say most people tend to lump them with KAAMOS and REPUGNANT, bands who released their albums in the late 90s or early 2000s after making demos. Perhaps too young to be called old school, but too old to be called new school, these bands, and others, were old school Death Metal in the new century before it was fashionable. Now, 18 years since their formation, NOMINON are still true Death Metal to the bone. "Manifestation Of Black" is a two-track EP, not quite ten minutes in length. First, the title track, ‘Manifestation Of Black,’ kicks off at a steady pace and doesn’t stray from the typical Swedish drum formula except for pauses meant to accentuate the eerie background riffs, and move things forward, keeping it interesting and purely NOMINON. Next: ‘Burnt Human Offering’ – my favorite song on this release. Everything about this song is manic: the vocals, bass, drums, guitars, all of it tailored to bring a sense of dementia and perverse pleasure at the image of human suffering, human fat bubbling yellow in consuming fire. This song more than the title track does the name “Manifestation Of Black” justice, for it is indeed a manifestation of teeth-grinding tension. Pure conflict and vitriol. I cannot get enough of this EP and hopefully neither will you! Buy or die! www.nominon.com, www.deathgasm.com