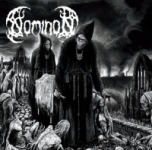 The fifth full length assault from Swedish NOMINON basically follows the path of the the forerunner “Monumentomb” (2010), which means that NOMINON sound nowadays much more indvividual than what you may like to label as classical 90s Swedish Death Metal. So don’t expect any DISMEMBER / ENTOMBED / GRAVE cloning here. No way; I think that also with “The Cleansing” NOMINON moved a step closer into delivering the spirit of very early MORBID ANGEL, early VITAL REMAINS, early DEATH packed together with a more classical European Thrash / Death approach. Expect a really dark offering, partwise it’s even close to a Black Metal spirit. Drummer Perra Karlsson gave a lot of focus on speed on this recording; expect some really violent blastings. It seems his drum duties and session jobs for DESTROYER 666 or DIE HARD left a mark as well. Vocalwise “The Cleansing” makes a more homogeneous impression than “Monumentomb”, which was recorded with different vocalists back then. Productionwise NOMINON worked for the first time on mix and mastering duties with Javi Felez (guitarist of spanish GRAVEYARD) in Moontower Studios, Barcelona. It’s a sort of break with Necromorbus Studios, but again it really gives NOMINON a totally pure and intense sound. Expect nothing blown up; “The Cleansing” is as real and raw as possible. It works well, although I think that “Monumentomb” and especially “Recremation” had a more crushing production. It’s a matter of taste, but it doesn’t harm the spirit. The songmaterial itself really delivers some in-depth stuff; you need some time to climb deeper and deeper into the abyss. Although I miss some first hand scream along tracks like ‘Undead Beast’ from “Monumentomb” I still think that this new album is a real grower with a healthy dose diversity within the boundaries of the traditional Death Metal genre. The coverartwork is done by rising Spanish underground artist Juanjo Castellano and really fits the spirit of this album like a fist in the face. According to my info the vinyl version will feature a bonustrack entitled ‘Slaughter The Imposter’. Well, I see myself as a big NOMINON fan and I think this band always truely managed to deliver releases highly connected and dedicated to the spirit of real underground Death Metal. The same goes for this 5th longplayer; this is non – bullshit, non – trendy Death Metal art; simply timeless and worth to be brought into your collection in a real physical format!!! For more infos check: www.nominon.com, www.deathgasm.com