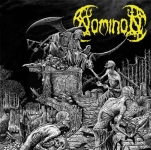 Another anniversary, another compilation! The Swedish hordes NOMINON left hell twenty years ago (twenty one now, to be honest) and take this opportunity to release a retrospect on their raging on earth. One song from each of the five albums Juha Sulasalmi and his varying allies released to date are on this compilation, plus four rare demo recordings and four more songs from various EPs. If you’re a die hard fan of NOMINON, the songs on "Decaydes Of Abomination" are an old hat. For all newbies to NOMINON (like me as well), this compilation gives a pretty nice overview on the changing history of a band that already were called "sons of ENTOMBED". This not very complimentary label is not by chance, for NOMINON are very much rooted in the old Swedish Metal scene of which they are a part. But to reduce them to be mere trend hoppers would be wrong, for they were there when it all started and their first demo recordings had some nice little Thrash elements as well. Check the rare 1993 demo song ‘Blodsblot’ for this, that somehow reminds me of those CORPSE demo recordings. NOMINON started to fully present their classic Sweden Death influences later, in times, when the flagships slightly weakened or modernized their style a little bit. Two other demo songs, ‘Cemetery Of Life’ (from 1996) and ‘Night Of Damnation’ (from 1997) showed this. And for their debut album "Diabolical Bloodshed", NOMINON even turned out to be impressed musically by DISSECTION – the intro piece of ‘No Holy Ghost Shall Rise’ may serve as a proof. But even though NOMINON really did not revolutionize the Metal of Death, especially in the new millennium, their newer offerings are pretty enjoyable for lovers of old school Death. I personally dug the groove refined monster ‘Among The Beasts & Ancient Slumber’, taken from "Terra Necrosis", and ‘Undead Beasts’ from "Monumentomb". But also the EP songs ‘The Lost Ones’ with its funny pig squealing guitar break and the extremely raw produced 7" song ‘Burnt Human Offering’ (released for the first time on CD) are my cup of tea. For the real NOMINON freaks here: ‘Mantra Reverse’ is an up to now unreleased pre-production recording from 2009, and the D-beat inspired ‘Phantoms’ (originally on "The True Face Of Death" mini) is presented in an unreleased version here. As a bonus, the CD contains the promotional video clip NOMINON did for ‘Hordes Of Flies’ in 2006 (you can also watch it here). So, if you ever intended on checking out the NOMINON cosmos, "Decaydes Of Abomination" is your chance. Check: www.nominon.com or www.deathgasm.com