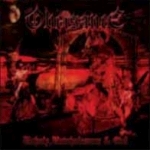 Now that’s something different. One quick research at christiananswers.net tells us that the meaning of the word obeisance according to Gen.37:7; 43:28 is “homage or reverence to any one”. Well, something tells me that these three American fuckwits aren’t exactly paying tribute to any kind of intelligent designer with their music… But whoever inspires them to their merciless and unrelenting onslaught does a damn good job since this is surely one of the more interesting releases from the pits of the deepest underground I’ve come across lately. I can’t be bothered with genre classifications too much here since all that matters is the overwhelming power and aggression that is delivered. Very roughly put, a mix of early MERCILESS and ANGELCORPSE might come close. Of special note is the production since they went for a very natural and “dry” drum-sound, very much like that on VADER’s “Future Of The Past” if anyone remembers and since they’re “only” a three-piece you also get a clearly audible, heavily distorted bass. The vocalist manages to sound utterly possessed without all the technical manipulations that have become so usual within this genre over the years – hell, that’s even an original ‘Angel Of Death’- shriek at the start of ‘Apokalyptik Visions’! So, in conclusion, this is a horde which would suit perfectly into the billing of the “United Metal Maniacs” – Festival: 110 % old school to the bone without sounding dated or being but a mere shadow of past days glory. Horns up! www.blackseedprod.com