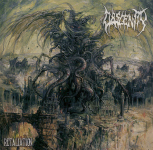 I’m pretty sure, most of you peeps out there share the same feelings on situations like these; you get to know about a new release of a band you really enjoyed and listened to back in the days, but to some undisclosed reasons completely lost their trail over the years and think by yourself: "Damn, they’re still alive?!" This is exactly what happened when I got informed about OBSCENITY’s current release. I can still recall their more than average and quite decent mid to end nineties releases like "The 3rd Chapter" and "Human Barbecue", but honestly, for some years I wasn’t even sure if they’re still around. I know; shame on me! And I guess in addition, several line-up changes and shut down labels did not create a cosy situation for the band as well. But as a popular saying goes: what does not kill makes us even stronger. And so we are here in 2016 and OBSCENITY is still there, to present their already 9th slasher called "Retaliation". In my blurred memories OBSCENITY always stood for brutal, classic Death Metal with a more of an American vibe so to say. And with no surprise, it’s the same as of today. These five northern lights deliver almost 45 minutes of more than solid, top notch Metal of Death that is absolutely able to operate on an international level and does not have to hide behind other long running institutions for no second at all. Imagine a mean bastard of unbridled brutality between old SINISTER (especially vocal wise; Mike van Mastrigt anyone?), MALEVOLENT CREATION and MONSTROSITY scattered with addictive and high melodic guitar solos, Michael and Christopher Amott (ex – CARCASS, ex – CARNAGE, ARMAGEDDON, ARCH ENEMY a.o.) would have been proud of and you may get a first glimpse of what’s coming at ya! Topped off with a matching cover artwork created by Paolo Girardi and a production that definitely does justice to the containing 10 tracks on "Retaliation", you gonna have the pleasure to witness blasting and brutal Death Metal with that required mid-tempo amount and a certain technical aspect with no need being labeled technical Death Metal. These guys don’t have to incorporate endless riff orgies with a thousand drumming breaks in just one song to show their ability of creating sophisticated and perfectly crafted music. "Retaliation" speaks for itself from the first to the last second. No Core, Tech, Jazz, Occult, Slam or whatever called trendy bullshit here! Just plain, brutal and classic Death Metal made in Germany, the way it’s meant to be; right in your fucking face! And when it’s over you wanna ask for more. I really do hope, that after already 27 years in service, OBSCENITY finally earns the attention they always deserved but never got. Because even with a respectable back catalogue in terms of quality releases they always seemed to be way too underrated. Would be great to see this might change with the release of "Retaliation" and that people gonna explore the potential of that northern German five piece and maybe recognize that not every shitty release / band praised in those glossy zines is worth the hype. You just can’t compensate sales figures for more than two decades of musical passion. We can only hope that there will be a vinyl edition of that mean fucker as well, someday soon. Meanwhile check the following links and in case of liking, get your hands on a copy of the CD. www.facebook.com/obscenity.official, www.kolonyrecords.com