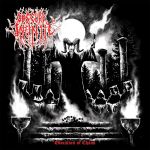 No need to introduce German warriors OBSCURE INFINITY to any of the Voices readers. Active since 2007, they released four very good albums so far and a bunch of split releases with several other underground bands as well as some vinyl only bonus tracks. So it was a good idea from F.D.A. Records to collect all those songs from these rare releases to combine them on a full album. But some extra work for me to describe the many tracks from the several recording sessions. The opening track ‘Astral Voyage’ is a mixture between BOLT THROWER and UNANIMATED with some nice DEATH vibes. Really good how they picked up these influences to write such a good and unique track. Especially the melodic lead guitar and the solo is really great. So good to have this track availbale again. ‘Poison Tongued Defiler’ continues on the left hand path. Old school but also very melodic with again good instrumentation and powerful drumming and very well-fitting drums. And once again with a damn good classic Heavy Metal influenced solo which is pure joy to listen to especially when it flows back to the DEATH influenced rhythm guitars which get paired with some Swedish sounding leads at the end. ‘Lords Of Disease’ is an uptempo track which shows another side of them. Pure and fast Death / Thrash with really deep guttural grunts and fast drum attacks before some choirs appear and the classic Heavy Metal notes get incorporated. ‘Ashen Embalmment’ (taken from a split with LIFELESS) is a solid uptempo Death Metal track with a technical Death Metal edge before again their brilliant classic Heavy Metal side appears. ‘Perdition Destiny’ (from a split with WOUND) offers solid and fast Death Metal with a slight note of mighty DESULTORY in the rhythm section. ‘Joyless Flesh’ again is an uptempo track with some Death / Thrash vibes and solid guitar work. ‘Maniac Destroyer’ is taken from a split with FUNERAL WHORE and unleashes its power after a while in form of pure and evil Death Metal at its best. ‘Sign Of The Nightsky’ is influenced by Scandinavian Death / Black and seems to be from an older session but I could not find the recording year. ‘Absurd Existence’ was taken from a split with DEATHRONATION and offers some Dutch influenced Death Metal, similar to the nearly forgotten GOREFEST. After the interlude ‘…And Only Past Remains’ with some quiet strings ‘Tomb Of Mortality’ is pure old school Death Metal, but also seems to be the oldest recording here as it offers all trademarks later used in their songs. ‘Into The Depths Of Infinity’ offers slow speed Death Metal similar to old HYPOCRISY (slow speed?! – Frank). ‘Maniac Deytroyer’ has some really excellent drumming and also classic vibes before the compilation closes with the epilogue ‘Far Beyond The Stars’. Rounded off by two live bonus tracks and a damn cool and obscure underground cover artwork, this compilation is again much value for only little money. OBSCURE INFINITY is music from fans for fans. For more info, please check one of the following sites: www.facebook.com/obscureinfinitygermany, www.fda-records.com