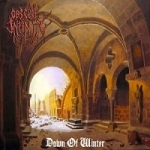 This was quite a surprise, since I was so stupid to expect a compilation of the Swedish old school Death Metal namesake. After a well done moody intro ‘Summoning Of The Ancient Ones’, which suits the occult and majestic atmosphere just fine, ‘Sacrifical Ritual’ sets in and hell yes it’s Death Metal and hell yeah it’s old school! Actually, it sounds so damn old school, it’s ancient! Founded in the beginning of 2007 by Jules (vocals) and Stefan (guitars), they’ve already released a demo called "Into The Depths Of Infinity" in 2008 which I haven’t heard but I’m almost sure I missed something great because in the way they play, these guys are passionately devoted to obscure and underground Death Metal. The bio mentions they’re influenced by UNLEASHED, DEATH, PESTILENCE, OBITUARY, AUTOPSY, MORGOTH etc. Well, some of them you’ll recognize in their sound, but as soon as ‘Sacrifical Ritual’ started a similar atmosphere of more barbaric bands like EMBRACE OF THORNS, MIASMA, old BELPHEGOR, VERMINOUS etc. manifested my headphones. Expecting the same rawness as these bands unleash, I was wrong again, since OBSCURE INFINITY incorporates elements from Black and Thrash Metal in an excellent way!! Sometimes it’s majestically powerful and dramatic like THE CHASM, INFINITUM OBSCURE and DISSECTION on tracks like on ‘Transmitting Life To Darkness’ and ‘Weak Havoc – A Blackened Mind’, sometimes the music sounds like the new generation of Black Thrashers like NOCTURNAL GRAVES, GOSPELS OF THE HORNS and others, like on ‘Incinerator’. ‘In The Depths Of Below’ even reminded me a lot of SADISTIC INTENT because of an awesome groovy main riff. ‘Morbid Ways Of God’ even added a twisted REPUGNANT swing. The riffs that Stefan and Florian unleash upon us are very effective and classic! Not original, you might think, but let me crush that remark immediately by the fact that it doesn’t need to be original when it forms such an awesome release! On top of that, "Dawn Of Winter" contains some very cool midtro’s ‘Foreshadowning Of A Coming Storm’ and ‘The Firmament Breathes Eternal Tranquillity’ and some excellent solos!! Vocalist Jules has a lovely Deathgrowl, supported by occasional screams and whispering. Drummer Oli knows just perfectly how to keep things balanced. His style is not technical but spontaneous and very capable to handle the different styles of the music. No matter what direction they choose, in every way it gets a firm grip on you and won’t let go! These guys are here for dedication and quality so what do you want more? Support the guys!! Get "Dawn Of Winter" if you’re into aforementioned bands and likes. The only remark I can find on "Dawn Of Winter" is the long songtitles that contribute to this quite long review. Definitely a must have record and a very significant player in the German (and international) scene! For more info check out www.myspace.com/obscureinfinity or their label www.obscuredomain.com, run by our dear colleague Hacker! 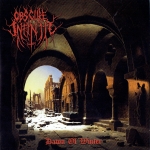 Nope, “Dawn Of Winter” is not the new album of Germany’s hopefuls for the Death Metal hall of fame, OBSCURE INFINITY. In fact, it is their first album that saw its original release in 2010 on dedicated Obscure Domain Productions. Since the band signed a deal with F.D.A. Records a few years ago, the new label makes the album available again, sadly only on CD up to now. Looking at “Dawn Of Winter” seven years after it first saw the dark of day, it can not be denied that OBSCURE INFINITY already showed all of their trademarks on the first album, maybe in a rougher shape. The classic old school Death Metal roots that are both European and American stamped, well balanced of course, were already the foundation the band based its sound on. Some riffs with a hint on classic extreme Thrash Metal also found their way into the songs as well as the one other Black Metal styled fast part. Of course the songwriting skills of the young band were not as elaborate as they are on their latest album “Perpetual Descending Into Nothingness”. But the youthful enthusiasm completely makes up for this little weakness. And the songs still are great, be it the opening tune after the obligatory intro, ‘Sacrificial Ritual’, the band classic ‘Morbid Ways Of God’ with its GRAVE like atmosphere or the title track. And with the two longer and more complex tracks ‘Everlasting Fires’ and ‘Transmitting Life To Darkness’, OBSCURE INFINITY already indicated that there were grand deeds to come. With its warm, dark and natural sound, “Dawn Of Winter” earns another Brownie point that guarantees some extra rounds in my player. So, things are set for nearly everyone to celebrate a Death Metal feast. If only Rico would offer a new vinyl release of the album as well… Maybe as a double album with the demo recordings? Well, that’s just an idea… Be sure to like the band at: www.facebook.com/obscureinfinitygermany, or visit the label to get your copy: www.fda-records.com