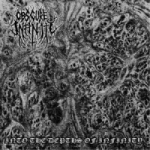 OBSCURE INFINITY
Into The Depths Of Infinity
(self-financed)
19:43min

An old school Death Metal band called OBSCURE INFINITY? Strange, thought they disappeared years ago… Obviously we are not talking about the Swedish Death Metal band from the early nineties releasing such great tapes as “Beyond The Gates” or the Promo ’94. Here we are talking about the German youngsters with the same name. Well, the Swedish band was not really well-known and never released anything else than demotapes therefore no one can blame this German band for choosing that name, a great name by the way. As written above this new outfit from Germany dedicated themselves to the again getting more and more popular style of old school Death Metal taking influences from such known acts as UNLEASHED, GRAVE, DEATH or ASPHYX next to some Thrash and Black Metal influences. The 5 song CD convinces with a very good sound which is surprising as they recorded it in their rehearsalroom. Technology makes it possible, haha. The amazing accoustic guitar intro and outro makes me think on old demos as well (anyone remembers EUCHARIST?) and they offer a nice variety to the other 3 songs. Especially ‘Tomb Of Mortality’ (this riff at the beginning sounds so familiar but, damn, I don’t remember where I think I heard it before…) and ‘Maniac Destroyer’ are good tunes with an astonishing good sound. Music wise I have to say that it is quite good Death Metal in the vein of the above mentioned bands but far more melodic. Nothing spectacular, cool Death Metal which shows a huge potential for future releases. I won’t praise this demo too much, simply as it is nothing else than a good start and a cool sign of life of a young band, but not a CD you will listen to that often and won’t remember in a couple of years. Nevertheless, as there are good ideas, good musicianship, a great layout and the fact that we are talking about such a young band, I have high hopes that the next recordings from them will show a huge progression. Keep them in mind and look out for the things to come from German OBSCURE INFINITY. This name confuses me… Available for 5 € + 2 € postage and packing at obscureinfinity@web.de.