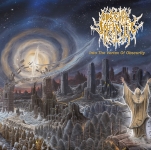 OBSCURE INFINITY
Into The Vortex Of Obscurity
(F.D.A. Records)
40:48min

Some bands are pretty easy to review, because the chance is high to get proper material to listen to. OBSCURE INFINITY and their full-length number four (not counting the singles compilation, which should also be considered as a full-length) is starting pretty promising. ‘Embrace Obscurity’ is pure Death Metal devastation. Fast and groovy material with good drumming, even better grunts, dirty and raw guitars but groovy as hell with the technical edge I really adore in their material. ‘A Cosmic Disgrace’ starts somehow similar like HYPOCRISYs ‘Pleasure Of Molestation’ but then continues the way, the opener started. Brutal and slamming Death Metal but with a good doze of groove before they decrease the speed for a melodic and technical interlude with choral vocals and a damn good solo showing how much skills the involved musicians have. The end is faster again but very technical and full of good ideas. My favourite track of the album somehow turned out to be ‘Grotesque Face’, which is slow speed Death Metal with a 90s Gothic / Death touch. Enriched by some strings, this track shows another side of the band and their huge range of influences before going back to faster melodic Death Metal. Again the classic Heavy Metal solo is outstanding and refines every track of them and the breaks changing the speed of the track also turned out really great. ‘Invoke Deliverance’ is faster again but points with its damn good lead melody and some thrashy guitars which take us back to the good old 90s, when melodic Death / Black / Thrash Metal was full of energy and creativity. By the way, the second best track of the album, ‘Lightning Spear’, starts with some DEATH influenced tunes before destroying mankind with its fast brutality without forgetting the classic solos. ‘Void Of The Soul’ offers such damn good guitars that this one could also be used for the Guitar Hero game. I really appreciate their melodic edge and how skillfully they combine their influences and own ideas to deliver such outstanding material. ‘Withering Starseed Under The Cosmic Vault’ is a well done stringed interlude before ‘Swallowed By Time And Darkness’ ends the album. This track reminds me of mighty IRON MAIDEN, as the guitar is heavily influenced by the British gods before OBSCURE INFINITY starts to raise hell again by increasing the speed once more and blasting their asses off with thrashy and technical guitars. The vocals here are also varied, away from normal Death Metal into spoken and screamed passages. The overall production is clear and very powerful and damn heavy enriched by a pretty fine cover artwork. In times where the scene is flooded by dozens of old school sounding releases, these guys really show, how to do it and deliver one of the best albums for 2019 already in the Spring time without any filler. Grab your copy via one of the following sources: www.facebook.com/obscureinfinitygermany, www.fda-records.com