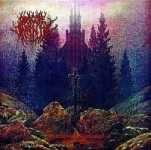 After German Death Metal outfit OBSCURE INFINITY delivered a strong full length debut album with 2010’s “Dawn Of Winter” I was really curious how these guys would develop and I was honestly very surprised when “Putrefying Illusions” kicked off since the powerful opener ‘Collecting A Desastrous Sun’ presents a melodic quality that reminded me of UNANIMATED, DESULTORY a lot whereas the following ‘Ascension-Kenosis’ is a really heavy traditional Death Metal stomper garnered with that classic ACHERON shuffle beat from 3min on. With Jules vocals concentrating exclusively on a mid-ranged roar the vocals appear a bit more consistent and more identifiable than before whereas the album’s general structure sends a nice respectful nod to DISSECTION due to the acoustic guitar interludes which they utilized on the previous record, too. ‘Crypts Of Damnation’ features some reminiscence to classic Finnish Death as well as brit Doom / Death with its thundering riffs and gloomy melodies before picking up speed again, mounting in another diverse track. ‘Clandestine Yearning’ is Swedish mid 90s melody-tinged Death raped by Teutonic Thrash and again symptomatic for OBSCURE INFINITY’s biggest strength: using obvious influences while creating something unique and captivating. Nowadays, the most apparent bands inspiring “new” old school Death Metal acts are either AUTOPSY or INCANTATION or ENTOMBED and while I can hardly complain about that, it’s quite refreshing to hear a band that unites less standard references without sounding forced or wanting too much at the same time. Mastered at the famous Necromorbus Studio obviously adds a another Scandinavian flavor and a good dose of reverb gives the entire record a dark and atmospheric aura that I personally find irresistible. Soundwise my only complaint is the drums as the kick drum is pretty hard to hear and not meaty enough. An extra horns up however for the super melodic somewhat Michael Estes (ACHERON) like leads which create a really moody flavor on an overall really enjoyable album. Also, during the second half it offers more killer tunes with the over 6 minutes long ‘From The Bleak Spots To Infinity’, the straight forward catchy title-track and ‘Of Creating And Wasting’ which despite bearing some similarities to UNLEASHED’s ‘I Am God’ at the beginning remains a good number. To sum it up: OBSCURE INFINITY might not have the “hit-density” of a band like ENTRAILS but they have impressed me with a coherent and well-crafted piece of honest and atmospheric Death Metal that is far more than just a 1:1 copy of somebody else. I’d just hoped I had not ruined my sexy OBSCURE INFINITY shirt at some festival’s drunken carnage as I would wear it an inch more proudly after hearing this! www.facebook.com/obscure.infinity, www.obscuredomain.com