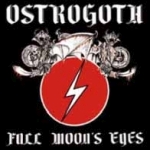 Once in a long while you get a classic, classic, CLASSIC EP of Metal! You have the legends of queensryche, mercyful fate, then there’s "Haunting The Chapel", "Warhead" etc. and this is indeed a fitting ‘nother for the list in my full moon’s eyes :)! The fucking unbelievably good debut recording from ostrogoth! After an acoustic passage to ‘butter you up’ it takes you into the title song that will bury the skull of even the most hard to please banger! Watch out… the ‘Full Moon’s Eyes’! Add on the amazing ‘Paris By Night’ chorus and chants as well as ‘Rock Fever’ and ‘Heroes Museum’, which both delve into smoking Metal fury!!!! I don’t know what to say more! This is an euro cult Metal EP classic! It’s a must must must own! I can’t praise it enough! The CD version also features an alternate version of ‘Ecstasy And Danger’. WHAT A RECORD also hit my skull in the later half of 1984 when Mausoleum Records started their long standing onslaught of Metal attack over the world with the band’s first full length "Ecstasy And Danger"! Starting off with what reminded me somewhat of the ‘deep freeze’ guitar bit from PRIEST’s "Rocka Rolla" LP and carrying right into something of a riff not far from MERCYFUL FATE’s ‘Doomed By The Living Dead’. The track ‘Queen Of Desire’ was an opening epic to melt minds and show the world OSTROGOTH was primed for a great record here! The record just continues on into Heavy Metal victory with the haunting yet powerful title track, the up-tempo pre-Thrash of ‘A Bitch Again’, and the amazing ‘Scream Out’, which would of been a great choice for radio airplay as it captures both the energy and class of a good Heavy Metal single! Awesome twin guitars throughout kept the instrumental sections above average, and the vocals of Marc ‘Red Star’ De Brauwer are quite stunning throughout! If you dig PRIEST, MAIDEN and the obligatory ‘traditional’ Metal approach this full length opus is more then all you need!