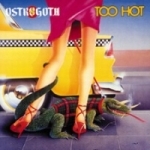 Starting off with the great title track this record shows that the band had sadly kinda run it’s course for amazing songs a la earlier penned classics like ‘Paris By Night’, ‘Full Moons Eyes’ and the epic ‘Queen Of Desire’! The guitar solos are fantastic and the vocals are as usual brilliant! But these are the ‘high points’! Somewhere the band just lost its clever nack for continuous awesome song-writing! It all kinda comes and goes without a moment you really ‘take notice’ any deeper then ‘this isn’t bad but it ain’t really too good’! My least favorite record by them with Marc on vocals. And the cover art is atrocious to boot! Haha what is it, a lady walking a lizard an catching a cab? Whoahhhhhhhhhh lizard Metal? Yikes!!! Well enter new vocalist Peter De Wint (somewhere in a Graham Bonnet sound) and a bit more laid back sound from the band on "Feelings Of Fury"! Though I must admit it’s not as good as the older material in general, and the mix really, really stinks! Catchiness has left the band for the most part here and that really hurts the record for me. ‘Samurai’ is one of the better songs, but even this one is a but ‘dull’! A keyboardist tries to ‘polish’ the songs but it doesn’t really work or is needed! Only the guitar duels of the boys is the saving grace here, even though new guy Junao isn’t as good as past god Hans! I can’t whole-heartedly recommend "Feelings Of Fury", but it’s decent! Just not in league with the earlier records!