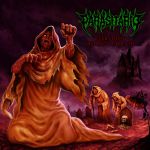 Japanese Death Metal outfit PARASITARIO started in 2018 as a very different band, playing Goregrind. But a year later, they shifted their style to a more “classic” Death Metal sound. The “Afterlife Truth” EP (2019) showed a very promising band and their 2023 debut “Everything Belongs To Death” is the perfect example of focused evolution. It is really interesting to try and define their sound because upon first listening, I was instantly thrown back to the early – mid ’90s, when Death Metal was dense, appalling and right in your face. I do listen to some pretty distinguishable influences here, mostly Floridian and Dutch Death Metal (i.e. MASSACRE and PESTILENCE). Yet, they retain that underground flavor, topped with a signature savagery, so typical of the ’80s Japanese Hardcore, Grindcore and Crust scenes. The material found in “Everything Belongs To Death” is solid and straight forward. Even though playing any kind of extreme Metal is difficult, I think that PARASITARIO avoids complexity in favor of a blunt Death Metal attack with predominantly mid-to-fast paced songs that never let you stop to take a breath. And yes, they also add a lot of (that dreaded word for purists) groove. And I don’t mean groove as in dancing, but groove as in headbanging. Most of the riffs that mainman Yuto Kotani churn out are simply neck breaking and mostly based on open chords and some tremolo picking infused with eerie melodic progressions. That guitar work stuck to me: memorable and convincing riffs. If time has taught me anything, it is that no matter how gifted or experienced musicians are, if you can’t play a good memorable riff, you are destined to oblivion. Luckily, there are plenty of those in this album. And the vocals… Those vocals have their own distinctive growl / scream resonance keeping up with the bottom and top ends of say Kam Lee and Martin Van Drunen (continuing with the influences list from above). Production wise, that familiarity is also present, yet topped with a crisp, thick sound that is still raw and harsh. It is as if these guys found a way to merge some classic studios trademarks from Unisound, The Abyss and Morrisound. Absolutely massive guitar rounded with a robust bass and pounding drums. The mix is clean and all instruments are neatly placed in their own spectrum, highlighting the vocals a bit. Actually, I could swear the drum sound is the main aspect that makes the overall production recognizable for me, but I am still not sure. The mastering is a little brick walled, which put me off a bit, since a good dynamic range could’ve helped a lot. But that is just me trying to find something to bash. All in all, PARASITARIO’s “Everything Belongs To Death” is one hell of a Death Metal album that brings in lots of well known elements of this subgenre, but adding their own identity. Absolutely and totally recommended for every Extreme Metal fan out there! Support the band at www.facebook.com/parasitariodm and get their album from their label www.facebook.com/fdarec