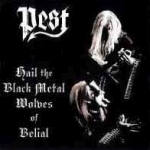 Finland has always provided excellent and captivating Black Metal and PEST are no exception. This full length is actually the compilation of all the tracks PEST recorded from their inception in 1999 until their demise (?) last year (2003, question mark again), in demo and 7" formats. In a time when it becomes extremely difficult to find authentic and really interesting Black Metal (except for bands like URGEHAL, HORNA and FUNERAL MIST) this album should be received as a gift from the Powers from Below. The main force of PEST lies in the fact that their Black Metal is no estranged from traditional Heavy Metal. This is obvious when listening to tracks like ‘Satanic Winter’ or ‘Towards The Bestial Armageddon’, where the main riffs are firmly rooted in the JUDAS PRIEST / ACCEPT tradition, revisited under the guidance of the Black Metal laws of sounding of course. The album kicks off with a concert of goats bleating (cool idea…), until the furious nightmarish PEST music takes possession of the speakers for an unrelenting assault. PEST compose an extremely graphic music, if that could make sense to you. In fact, close your eyes while listening to this and you could see ruined churches under the moonlight and sacrificed virgins upon unholy altars, in the way the old Hammer films depicted that. So, maybe I am wrong, but I doubt the PEST musicians take their satanic stances too seriously, I think they are only here to have fun, playing good music in the way the old Black Metal Gods (and especially BATHORY, HAIL THE MASTER!) did before them. Of course the sound quality is far from crystal clear, but the song writing makes up for that. Don’t expect an overall speedy record, quite the contrary actually, as PEST seems more at ease with mid-paced (but very intense) stuff. Highlights of this record are the only (until now) unreleased track (‘The Black Conqueror’, very ambitious and well structured), the atmospheric ‘The Opening Of The Eyes Of Satan’ (build only on slow guitar wails and demented screams) and ‘Possessed Wolves Howling’ with its cool VENOM / IRON ANGEL / MERCYFUL FATE vibes. Add to all this a lot of leather and spikes, and a tag "Holocausto is God!" on the back cover (the reason I bought this CD in the first place!), and you should feel right now the urgent need to listen to this. This is Black Metal with sense and a real concern for Metal as a whole genre. Simply superb! Check the regular distros to get this.