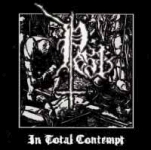 To make it clear from the very beginning: compared with its predecessor “Desecration”, the new PEST – album is a heavy let down. While “Desecration”, despite being an obvious DARKTHRONE – clone, was a very good album, I unfortunately can still not say this about their new album although I really tried to like it. The ingredients are still the same “Under A Funeral Moon”, “Panzerfaust”, but also some newer DARKTHRONE – influences with songs that could have easily been on their latter more Black’n’Roll – oriented albums. The problem is however that in my opinion, the complete range does not work half as good as it did on “Desecration”. It is too much of DARKTHRONE mixed in one album, so to say. Still, this is better than many of nowadays bands that try to sound as the originators of the Norwegian Necro-sound, but bearing in mind that PEST have shown that they obviously can do better, this record is a disappointment in my book. www.no-colours-records.de