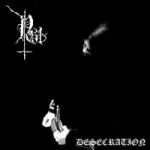 Honestly I don’t know why I got hands on this CD if I have a look on how much Frank, our chief-editor, praised CRAFT and ARMAGEDDA. Because compared to at least ARMAGEDDA’s debut-album, this is even the better choice – a good album of total DARKTHRONE-worship, in this case concentrating on the albums "Under A Funeral Moon" and "Panzerfaust" (especially the vocals) and having said that, there is not much left to say as we all know what this means: bloodfreezing riffs, hatefilled vocals and a shaver-like production. Honestly I only have my doubts whether the drum is one with flesh and bones or a well-programmed humanoid, as the drums partly sound too synthetic, but I wouldn’t bet on it, could also be due to the production. You obviously will not find any originality on this album, I am pretty sure that the last part of ‘Decending’ is also more or less a copy of a SATYRICON-riff from "Dark Medival Times", but if this doesn’t matter and you simply want a good old school Norwegian-like (as these guys are Swedes) Black Metal-album, this could definitely be your thing. Comes also as gatefold vinyl. www.no-colours-records.de