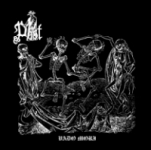 First of all, the band PEST we deal with here is the one from Germany, just because many bands are active under the monicker PEST by now as we all might know. "Vado Mori" is the band’s 3rd full-length album after one demo-tape and 2 albums. PEST have attracted me already with their demo "Schwarze Visionen" and the first album "Ära" by a certain kind of morbidity and melancholy their music spreads. PEST celebrate simple and raw Black Metal with high-pitched vocals and a suitable raw production. Weaving disharmonic guitar-tunes in the remaining wickerwork, in the talented way they do, spreads really oppressive atmospheres. This is the main point what differs PEST from the most other raw Black Metal bands, they have got this inborn sense of morbid tunes. "Vado Mori" is not THE "killer release", although it is really above the average, it comes silently just like the black death itself. Give it a try! www.ketzer-records.de, www.pest-musik.de