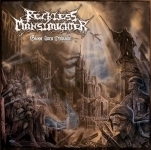 Usually, reviewing bands people I know are playing in is something I’d rather refrain from as I don’t like brownnosing and thus another comradeship might go down the drain just because I could not help being honest. However, German fellows RECKLESS MANSLAUGHTER fortunately deliver rock solid midfield Death Metal inspired by the likes of CANNIBAL CORPSE, BAPHOMET, MONSTROSITY, some Scandinavian classics and old school stuff like ASPHYX. You sneer at “midfield”, well, one thing that has become a rather rare breed today is Death Metal that’s combining an old school-ish to-the-face approach with bits of technicality, a kick ass production, some groove, some blasting speed, compact songs just like the fabulous SINISTER offshoot SUPREME PAIN did with the merciless “Divine Incarnation” or MALEVOLENT CREATION and the likes did in their heydays. Today, too often it’s all super underground cavernous old school Death, super uninspired copycats or super technical Nintendo-melodies meets Slam-parts stuff and thus super boring in the end. So, thumbs up for RECKLESS MANSLAUGHTER as they strive for an original sound that exposes their roots while attempting to combine them in a refreshing and less common way. Unfortunately, this has the negative side effect that some unfitting groovier sections or weaker riffs spread all over this well produced platter – mixed by Dan Swanö – and along with rather off-the-shelf lyrics result in a flawed yet still respectable effort. Another weakness, but that’s totally a matter of taste, is the high-pitched screams in a recent Chris Barnes fashion vocalist Leimy implements in his otherwise excellent growls, I simply can’t stand this easiest way of creating “dynamics” as too often it just sounds a bit forced and predictable. Also, the NY Death Metal brick-heavy chugging parts oppose the overall straight, up-tempo and pretty furious drive of the band instead of melting fluently with the traditional elements of their sound. Call me a nutpicker but apart from the great sound, cool leads, killer growls and positive stylistic direction, “Blast Into Oblivion” still presents a band that has to find its comfort zone and expand on that. RECKLESS MANSLAUGHTER try out a lot yet not all of it works in their favour and the songwriting is still too unspectacular to really make an impact, gripping choruses rare and amazing riffs, too. When the epic closing track ‘Iron Casket’ (featuring guest vocals of Mike Hrubovcak of MONSTROSITY / ABRAXAS/VILE fame) rolls over you, you realize these guys can do more, hopefully they develop the ambition and ability to separate the wheat from the chaff and turn a conventional murder into a full-blown massacre. Good luck! Honestly! The fantastic artwork by Mr Castellano and well-designed promo (incl. band bio, a slick black disc) comes across totally pro, so visit www.recklessmanslaughter.com and give them a chance. A studio video teaser can be found here. All further info at www.facebook.com/recklessmanslaughter or www.finalgaterecords.com