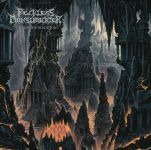 Despite the fact that RECKLESS MANSLAUGHTER are around for a decade now, this is the first time I heard of them. Shame on me! That is to say that the German five really has something fine to offer on their third full length album “Caverns Of Perdition”. The artwork by the man himself, Death Metal icon Dan Seagrave, already hints on Death Metal, the old school. And it’s not a delusion. RECKLESS MANSLAUGHTER are a band that can not be pressed into a scheme like European, Scandinavian or American style. Instead, they created a blend of nearly all old school Death Metal directions and added a few more modern elements to their sounds. The result is a refreshing album full of Death Metal played from the rotten heart. Shorter attacks like ‘Operation Chastise’ or ‘Stiffshifter’ alternate with longer, more diversified tracks like ‘Unleash The Spirits Of The Fallen’ or ‘Vaporized Crucifix’, and with ‘Into Unknown Caverns’ we even find a rather fine instrumental song on “Caverns Of Perdition”. Yes, this sounds like an album definitely worth listening to for Death Metal lunatics. But RECKLESS MANSLAUGHTER saved the best for last, and finish the album with the ultra-heavy and vicious ‘Funeralmaster’. This eleven minute long monolith is more a lava stream than a song, viscous and cross-grained, with some pretty insane guitar harmonies. The deep grunts of Leimy never fitted better than on this song. Somehow ‘Funeralmaster’ sounds like URFAUST composed a very huge Death Metal monster. This song alone is worth listening to “Caverns Of Perdition”! It seems like Rico from F.D.A. discovered a new gem here. So don’t hesitate to check RECKLESS MANSLAUGHTER at: www.facebook.com/recklessmanslaughter or visit their label: www.fda-records.com.