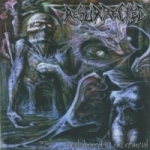 RESURRECTED are hailing from Duisburg / Germany and should be known to fans of brutal Death Metal by now as “Butchered In Excrement” is already their third full length. And judging the band by the qualities delivered on this newest offering, I don’t really understand why I didn’t notice them any earlier. This is absolutely cool stuff, totally in the extreme grinding US Death Metal style that bands like CANNIBAL CORPSE, SUFFOCATION and the likes managed to establish several years ago. Even though the eight own compositions are mainly straight ahead and right into your face, RESURRECTED perform them on a quite high technical level. Certainly not original at all (who cares?!), but always brutal as fuck! The whole record is blessed with a very powerful production and comes up with a great coverart by David Bollt, who a.o. was already responsible for the visual side on the DIVINE EMPIRE debut. But the ice on the cake definitely is RESURRECTED’s nicely executed cover of the SUFFOCATION classic ‘Infecting The Crypts’, which fits the record just perfectly! So, the only little complain I have is the stupid porn like ‘Macabre Fuckfest’ intro. I never really understood why bands like these used the porn genre as inspiration source for a musical style that mainly deals with guts, blood and gore… But anyway, as the intro only lasts a couple of seconds, we shouldn’t value that too much and highly recommend “Butchered In Excrement” to every fan of brutal US style Death instead! All further info at: www.resurrected.de