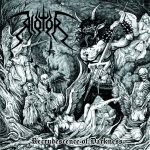 After a lengthy five years, Quebec blackened Death / Thrashers RIOTOR return with their fourth album of pure speed mania on Sweden’s Bestial Invasion Records. The band has been raging since their 2007 demo and picked up a following with the release of their 2010 debut album “Beast Of Riot”. Let’s see if they kept that consistent formula from the previous three assaults that brought them to the dance. The party gets started with the instrumental song ‘Birth Of Depravity’. The wild guitars, pounding bass and thunderous drums prepare you for what is coming up next in the form of ‘United Metal Maniacs’. Here is where things just get kicked up to eleven from the blasting beats at the start. The drum fills deliver nicely and complementing the guitar while paying homage to the headbanging warriors that inject new blood to the Metal brotherhood. A crisp production on this album really helps capture all the elements and clearly illustrates each instrument. The bass drums needed a bit more volume to really have them pop a bit more instead of being drowned out by the snare. One song that really got burned into my mind was ‘Matamore’, especially with the guitar riff melody that sounded very late 90s Swedish melodic Death Metal in the vein of DISSECTION or SACRAMENTUM. The guitars really stand out on the next song, the insane fretting at the start of ‘Fraternal Genocide’ was a nice touch. Like a shot of adrenaline, it just gets your head banging with madness! You can pickup on the MARDUK worship ‘Death Scythe’ from the start of the song, with the drums firing off at 1000bpm and continuing through out the song with hints of SLAYER like guitar riffs towards the middle of the song. This was a fun album to listen to that was chalk full of excellent heavy / wild riffs, solos and blasting drums. The guitars in my opinion stole the show on this album, very solid picking and wild solos. You get eleven tracks under 45 minutes of pure willed carnage and chaos. I checked this album out while I was hitting the trails on my bike and it just made the whole ride that much more fun. It is an excellent blend of music that would easily grasp the attention of any Black, Death or Thrash Metal fan and that I would highly recommend. Cheers! For more RIOTOR information please visit: www.facebook.com/riotor, label contact: www.facebook.com/profile.php?id=100063481655638