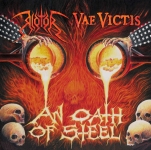 A split from two vicious acts, Canadian thrashy Speed Metal demons RIOTOR, that have released 3 smashing and violent full length albums stuffed with brutal thrashy Speed Metal, raw, shredding and to the bone. Their brothers in arms from Germany, VAE VICTIS, are a tad darker and more gloomy, they are smashing their side of the split up with Black Metal infused with thrashy elements and flair for invoking a dark atmosphere. They are also having 3 full lengths under their belt, also quite good material for a dark windy autumn night. RIOTOR kicks off the shenanigans with 3 of their own tracks and a well delivered cover version of fellow Canadian Thrashers SACRIFICE’s ‘Forward To Termination / Terror Strikes’. Their own tracks are intense and straight in your face, great aggressive guitar riffing, menacing rhythm patterns and vocals you either love or hate. I am a fan of them. High, quite rasping and glass-shattering, and so intense and aggressive. The perfect match for the music – and they could do well in a ripping Black Metal band as well! Punishing drumming, fierce guitar leads, nostalgic sounding, this could have been made in the late 80s, but it is so damn fresh and not just a total rip off of the good old times. The first I thought of when VAE VICTIS started out their Metal for demons, was good old fellow Germans DESASTER and their early releases, before it became too thrashy. Then appears a cover version of the mighty POSSESSED and their ‘Evil Warriors’ from “Seven Churches”, and then the riff progression and dark and wee muffled pummeling production made a lot of sense. Again fierce riffing, a great dark atmosphere, a really good and fitting, quite low production, aggressive intensity and great vocals, reminding one a tad of good old Jeff Becerra – and again a thick nostalgic feel to the music! It is quite an intense and powerful split Bestial Invasion has released! The now Swedish located label has done some great releases throughout the years, and has had at least RIOTOR on their roster. VAE VICTIS is without a label, which I can’t understand, that might change now, if not Bestial Invasion has snugged them! Both bands here are kicking good nostalgic arse, so if you are missing the good old golden days of speedy Thrash Metal and blackened Thrash, then “An Oath Of Steel” will finish this year off, in a bit better manner, than what we’ve been through so far, not speaking of music! www.facebook.com/riotor, www.facebook.com/vaevictisblackthrash, www.facebook.com/bestial-invasion-records-247631521920716