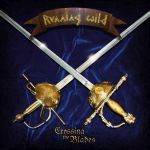 RUNNING WILD has two stages in the history of the band. The first, when they were singing about Satan and his minions. The second when they turned to the sea and the Pirates (and yes, still about the lord of darkness, but now in its watery stage). Musically we can also talk about two stages. The killer Speed / Power Metal period of their first two albums, and then later the more Power / Heavy Metal that they still do to this day. I like their first stage more, yet I found that they still do very good albums, that at times are sounding a bit the same, but that are still good anyway. This new EP is no different from what you can expect from the band. You can close your eyes and think about a bunch of drunken sailors in a tabern, telling tales of treasures and conquest with a big laughter. The good thing for this German band is that although they do sound now more Heavy Metal, one can still feel the Speed Metal origins in their songs. Rock’n’Rolf’s vocals have only improved with the years, and live the band has a first level show. It is hard to understand why they have never joined the bigger leagues as they do have everything to do so. But it seems the band is comfortable with a loyal following since they have been doing records for so long and their quality does not diminish even with the bigger waves. There’s 3 original songs and a KISS cover (‘Strutter’) on this EP and the material is something that fans of the band will surely devour before getting a new album. www.facebook.com/runningwildmusic, www.spv.de