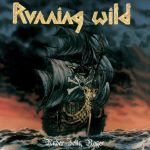 So here we have the deluxe expanded edition Noise Records recently released of another RUNNING WILD classic. You may enjoy more or less their later works, but what a force to be reckoned with this band was back in the eighties (and nineties for that matter)! Their early albums are monuments of Heavy Metal, full of unforgettable songs, and this is no exception, with monsters such as ‘Beggar’s Night’, ‘Diamonds Of The Black Chest’ or ‘Merciless Game’. All songs have a degree of excellence, really, with the added aura when you hear them throughout the ages, back from the dawn of your life. Here the band gives birth to their pirate image, and in spite of approaching a number of topics in the lyrics, the pirate theme is made more prevalent via the cover artwork and mainly the title track, as well as the fact that it is the one they would pursue in albums to come, and that would be more readily associated with them. Truth is the lyrics focus more on rebellion against tyranny and rather more typical Heavy Metal themes. But here was the start of a journey through the high seas that would become more fully-fledged in the follow-up "Port Royal" and later albums. It always amazes me how RUNNING WILD can play such relatively simple, raw and straight forward Heavy Metal and make it work so well and with such grandeousness. Even the production is rough, and yet, everything sounds great, from Rock’n’Rolf’s gritty vocals to the amazing solos and the ballsy, angry feel to it all. If you like eighties Heavy Metal or wish to delve further into its history, this band is not something you can overlook. In many ways they incarnate everything that was truly great about Heavy Metal. It makes a reviewer lose his composure and turn the stereo fucking louder in order to properly headbang! And that’s the effect this music is supposed to have. The bonus CD includes a number of goodies: four re-recorded songs from the 1991 "The First Years of Piracy" CD, three re-recorded songs from 1992 and 2003 and an unreleased song from the "Under Jolly Roger" sessions. This one is called ‘Apocalyptic Horsemen’ and it’s actually a fine song with the typical RUNNING WILD sound. The drums, however, sound so programmed I immediately identified none other than their legendary drummer Angelo Sasso. And indeed, the song first surfaced in the 2003 "20 Years In History" compilation, and so it has been at least partially re-recorded then. It may also be the most interesting bonus tidbit, as the re-recordings don’t really add much to the originals other than the chance to hear and enjoy them again. And a welcome chance it is! Now set sails to Port Royal! www.running-wild.net, www.facebook.com/runningwildmusic, www.noiserecords.net