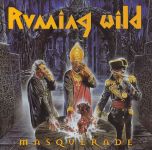 If the intro does not tell you something then the blazing speed of ‘Masquerade’ will. Oh, yes, we have fire in the cannons again in 1995! Same line-up from their past album and it seems the thing of bringing back the Speed Metal elements have worked as this is top Speed / Power Metal, and Rolf’s vocals are as great as ever. Yes, they are still raspy yet melodic. And also the theme of occultism and pirates works wonders. I must also mention that the production is fantastic, maybe the heaviest they ever used. The guitar sound is just so crunchy that it melts faces with ease. One thing that one can notice is that in here RUNNING WILD is actually doing more up-tempo Heavy Metal, rather than Speed or Power Metal, but yet they are not afraid to show where their roots lie. Of course some Speed Metal freaks (like me) would like the band to keep up in a tempo of the first brain-crusher song, but in any case they are wise enough to keep it fast and varied at the same time. The thing with this album is that as good as it is, some songs (while good) are not up with others, something that one can understand as how many killer riffs can you pit there, all of them that are invoking the gods of the sea? In this album I also sense a bit of a JUDAS PRIEST “Painkiller” aura. And that is never a bad thing. Comparing it to the previous album, maybe I would say “Black Hand Inn” is a bit better, but in any case, get both and you will be a happy Metalhead. This edition contains 2 reworked songs done in 2003, something it seems these Germans like to do a lot (as far as I know, all the 2003 versions that got used as bonus tracks on these re-releases, originally appeared on the "20 Years In History" compilation – Frank). According to some, RUNNING WILD has done great music since day one up to 1998… I have heard bits of their latest album and the essence is there, but… for a band with such a legacy, we must be thankful to the gods of the sea that we have a chance again to revive these great albums and for that a bottle of rum must be opened! www.running-wild.net, www.facebook.com/runningwildmusic, www.noiserecords.net