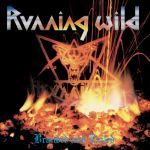 In 1984, RUNNING WILD had released “Gates To Purgatory”, an enormously important album, not only for me personally, but also for German Heavy Metal in general. Not even one year later, the band announced a second album. Still impressed by the debut album, my expectations were very high. Thus “Branded And Exiled” became the most expected album of 1985, despite the fact that original guitar player Preacher (in civil life Gerald Warnecke) left the band at the beginning of the year to really become a preacher. In retrospect, this loss was very important for RUNNING WILD, but that wasn’t forseeable back then. When I got my copy of “Branded And Exiled” a few days after it was released, I started to listen to the album over and over again. The eight new songs exactly hit my nerve back then. The musical direction of RUNNING WILD hasn’t really changed, it was only that the songwriting was a little more elaborate. So, in 1985 “Branded And Exiled” was one of my personal favourites of the year. But time can sometimes be cruel. Listening to “Branded And Exiled” 32 years later and for the first time in ten years, the album didn’t completely pass the test of time. Some songs like the stomping and marching title track or the melodic ‘Gods Of Iron’ still sound fine, but the other two songs of the first side of the album haven’t been treated well by time. Both ‘Realm Of Shades’ and ‘Mordor’ have lost a bit of their magic and became a little mundane stuff to my ears. For the b-side, it’s pretty much the same. ‘Evil Spirit’ and ‘Marching To Die’ are not really something to write home about any more, even the twin guitars of the latter won’t help here. But ‘Fight The Oppression’ still is a fine classic Metal tune with a catchy refrain, and the old band anthem ‘Chains And Leather’ hasn’t lost its naïve charm and its sing-along qualities. As I said, time can be a little cruel sometimes. And to be honest, without the songs of Preacher, who composed half the songs of the first album, Rock’n’Rolf lost his counter part. Thus it is no wonder that RUNNING WILD became more and more the band to back up Rock’n’Rolf. With the next album “Under Jolly Roger”, the band literally tossed their occult image of “Gates To Purgatory” over board and started to sing about and dress up like pirates. And the pirates turned to fools for me, the too polished cliché music did the one last thing. It took me years to find a kind of peace with the stuff RUNNING WILD recorded after “Branded And Exiled”. But that last good album, like all other albums they did for Noise Records, got re-released now. As it became usual for Noise Records 2.0, this one also got some extra tracks. In this case, they are pretty annoying ones, since we only find re-recorded versions of songs from the album. First we have three songs that were recorded for the album "The First Years of Piracy" in 1991. Those newer versions of ‘Branded And Exiled’, ‘Fight The Oppression’ haven’t been necessary, since they lack the original spirit. And the re-recorded version of ‘Marching To Die’ sucks, for now this song really is as exchangeable as most RUNNING WILD songs. And in 2003, the band put out a compilation called “20 Years In History” for which they recorded new versions of ‘Branded And Exiled’ (again!) and ‘Mordor’. With these versions, the songs met their Waterloo. Since these five re-recordings are the only bonus material, the album would be better off without any extra tracks. In case you need more info: www.running-wild.net, www.facebook.com/runningwildmusic or www.noiserecords.net